The White Robe (しろのローブ or 白のローブ, Shiro no Rōbu?), also known as White Mage Robe, is a recurring robe in the series. It is usually exclusive to the White Mage job, but sometimes, Summoners, Red Mages, or Sages can equip it as well. It halves elemental damage dealt to the wearer.

A robe that casts Invisira when used.

The White Robe is exclusive to the White Mage class. It resists Fire and Instant Death, has 24 Defense and 2 Weight, and casts Invisira when used as an item. It is found in the Flying Fortress.

A white robe that enhances spirit.

The White Robe grants a bonus of 10 Spirit to the wearer. It provides 30 Defense, -5% Evade, 21% Magic Defense, and resists the Body, Mind, Matter, and Death elements. It can be found at Mysidian Tower and dropped by Astaroth and Lucifer.

Robe made for those who use white magic.

The White Robe can be equipped by a character that can use White Magic. It grants the wearer a Spirit boost of 15 and protects against Darkness and attacks made by undead and ghouls. It is found in Lunar Subterrane.

White Robe provides 18 Defense, 10 Magic Defense, 5 Magic Evasion, and 10 Spirit, as well as immunity to Blind and resistance against attacks from undead and ghouls. It is found in the Subterrane.

Robe made for those who use white magic.

The White Robe increases the wearer's Magic and Stamina stats by three. It can be equipped by all the mage classes, Summoner, Chemist, Geomancer, Bard, Dancer, Oracle, Cannoneer, Mime, and Freelancer.

It can be bought in Phantom Village and Great Sea Trench for 8,000 gil, dropped by Mindflayer and found in the Pyramid of Moore. At the pyramid it is in a monster-in-a-box chest guarded by either one Archeosaur (common) or an Archeosaur and two Ushabtis (rare).

Robe made for white mages.

White Robe can be synthesized and found from a Chocograph treasure. It can be equipped by Eiko and Dagger. It teaches Eiko the Wht Mag spell Holy and makes the wearer's Holy-elemental attacks stronger. It also teaches Auto-Potion and Loudmouth. Though not mentioned in the menu, it makes the wearer weak to Fire.

White Robe can be synthesized in Daguerreo for 8,000 gil, a Gaia Gear, and a Jade Armlet. It is also found in the Sea at Dusk Chocograph, and in the Chocobo's Lagoon with a dark blue Choco.

In the original version, White Robes are high-level mystic armor that can be equipped with the Mystic Armor 10 license. They provide 38 Defense and 10 Magick Power and can be purchased at Balfonheim Port for 13,500 gil, and from the bazaar along with the White Mask for 22,800 gil by selling Holy Crystal x8, Blood Wool x9, and Beastlord Hide x7. Equipping a White Robe boosts the user's Holy-elemental attacks, such as the Holy spell and physical damage from the Excalibur.

In the Zodiac versions, the White Robes now provide 53 Defense, 100 HP, 66 MP, 10 Magick Power, and 4 Speed. They boost the potency of Holy-elemental attacks, and require the Mystic Armor 11 license for 80 LP. The robes can be found as a treasure in Cerobi Steppe (Old Elanise Road) and Pharos - Third Ascent (Spire Ravel - 2nd Flight), stolen from Piscodaemon (3% chance) and Ultima (common) in Trial Mode Stage 95, and bought from the bazaar for 12,800 gil after selling the same items as before. They can be equipped by the White Mage, Black Mage, and Red Battlemage, and Bushi.

The White Robe halves Fire, Ice, and Lightning damage dealt to the wearer, and grants a small bonus to both HP and MP. It can be bought at the outfitters for 9,000 gil after the events in Lesalia Castle (chapter 3).

The White Robe halves Fire, Ice, and Lightning damage dealt to the wearer and teaches Turbo MP to White Mages.

A robe of the purest white. Better than black magick for defending one's person.

The White Robe halves Ice damage dealt to the wearer and teaches Turbo MP to White Mages. It provides +23 Attack and +48 Magick. It can be bought for 1,800 gil after trading a Mind Ceffyl, Zingu Pearl, and White Thread to the Bazaar.

The White Mage Robe gives the wearer 33 Defense and 5 Magic Power. When equipped alongside the White Mage Hood, the wearer will cast curative spells when controlled by AI. It can be made using the Healing Raiment, and bought for 210 gil.

Robe favored by masters of healing magic. For all tribes.

White Mage Robe is a low-ranked robe that can be used by any race and gender. It provides 8 defense, 3 magic, and 4 magic defense at level 1, while at level 30 it provides 68 defense, 20 magic, and 34 magic defense. It also has one empty slot and can be bought for 630 gil. It can also be created for 160 gil by using Silk, an Elemental Gem, and White Dust x3. When turned into a jewel, a level 3-9 White Mage Robe makes a Spirit Stone 1, level 10-19 makes an Albinore, and level 20-30 makes a Violence Eye.

The White Robe can be bought for 350 gil from Liberte, Urbeth, Invidia, and Guera (after darkness). It raises the user's Spirit by 20%.

This robe is the embodiment of a white mage. The white robe is simple and soft to the touch, but boasts of a fairly thick and refined design. It is lined with material made from enchanted thread embroidered with mystical words that ease the mind and heighten the spirit. Those who wear this garment will be immediately recognized as white mages. It also emanates a great sense of purity.

White Robe is a Robe obtained by crafting it using 600 gil, x5 Light Crysts, x10 Light Megacrysts, x5 Gaia's Tears, and x5 Spellsilks, by finding it in Town of Amore, and by completing Intermediate D-5 of the Colosseum. It provides 34 DEF and 20 SPR. 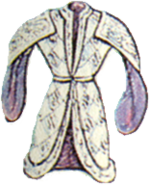 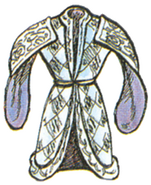