White Mousse is a Mark in Final Fantasy XII. The hunt can be undertaken after the player attains the clan rank of Vanguard. White Mousse is a breed of flan that lives in the West Sluice Control area of the Garamsythe Waterway. In the Zodiac versions, three of them are also fought alongside Orthros in Trial Mode Stage 41.
See also: White Mousse

Rarely, during the little-understood process of Subdivision by which Flan multiply, a Flan of purest White is born, this being the White Mousse. Known for its Tendency to swallow prey Whole, its Digestion requiring no masticatory assistance. Posted as a Mark by a certain Moogling Moogle who lost an Article of some Value.

A good strategy is to inflict Blind and Berserk on the mousse to inhibit its ability to use offensive magick, though its physical attacks will be stronger. Berserk wears off over time. The battle can be made easier by waiting until after defeating Judge Bergan and buying three Viking Coats to avoid Water damage, and equipping Goggle Masks to avoid the Blind status.

The party can use the Nihopalaoa accessory to make the ailments stick. The chance of landing a successful spell against White Mousse is low, but by using Nihopalaoa + Eye Drops the party can blind it on the first attempt, and using Bacchus's Wine (without Nihopalaoa) will berserk it. Indigo Pendant also makes statuses always stick from spells unless the target is immune.

White Mousse can be put to Sleep with either the Nihopalaoa + Prince's Kiss (Alarm Clock) or the spell Sleep. Once the mark is asleep, the party should use Fire, Fira or summon the Esper Belias. White Mousse has plenty of HP, and one dose of Sleep may not be enough. Flame Staves will increase the damage output from Fire-elemental attacks. It is advised to bring some Ethers (for any Mage-type characters that are not a high enough level for sustained Fire/Sleep spells) and to bring a White Mage to heal Poison/Blind effects when White Mousse wakes.

Another way to defeat White Mousse is to cast Reflect or Reflectga and then Fira or Firaga on the party. For each spell cast, the White Mousse will take three spells. If all of the characters cast Fira or Firaga, the spells will strike nine times (twelve if the party has a guest party member). However, the White Mousse will also heal itself with the reflected Waterga (Aquaga) unless it is sleeping or berserked. The Zodiac versions, use a job system that governs what magick each party member can learn.

The player also receives a Broken Key after the battle, which can be given to Sorbet outside of the Rabanastre aerodrome to obtain the Sluice Gate Key. The Sluice Gate Key allows the player to manipulate the water levels in the Garamsythe Waterway to battle and obtain the Esper Cúchulainn and for the three medallions sidequest, but is not repaired until the Tomb of Raithwall is completed.

White Mousse appears as an enemy. 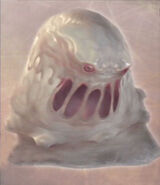 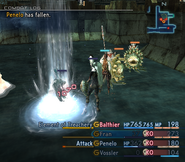 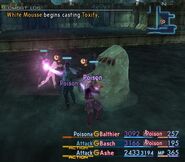 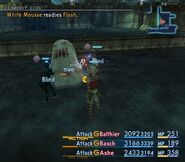 [view · edit · purge]Mousse is a pudding-like dessert made of sugar, eggs, and usually some kind of flavoring, such as chocolate. It can also be made non-traditionally with cream as an ingredient.