The White Materia (白マテリア, Shiro Materia?) is a powerful Materia in Final Fantasy VII and is counterpart to the Black Materia. Both are unique, there being only one of each. The White Materia is used to speak directly with the Planet and once the Planet receives the message, the Materia glows green. It is used to summon the "Ultimate White Magic", Holy, which summons the full power of the Planet to protect the continuation and harmony of life.

Mine is special. It's good for absolutely nothing.

When the extra-terrestrial organism, Jenova, fell to the Planet, the Cetran civilization was nearly wiped out before Jenova was sealed. As they had kept the knowledge of both Black and White Materia from their close cousins, the humans, the knowledge of Holy slowly died along with the Cetra as their numbers dwindled. Ifalna, the last remaining Cetra, lived in solitude in Icicle Inn to the far north, concealing the secret of the White Materia. When she died young she was forced to pass the Materia on to her daughter, Aerith Gainsborough, while the girl was still a child ignorant of its true power.

When Aerith becomes involved with Cloud Strife and AVALANCHE in their fight to save the Planet, she becomes aware the White Materia's abilities and realizes that if Sephiroth plans to summon Meteor, the only way to stop him is to summon Holy. She leaves Cloud and his allies—knowing Cloud is under Sephiroth's control and can't be trusted, much as she wanted to believe in him—and heads north to the Forgotten City, where she begins to meditate to call upon Holy.

As Aerith contacts the Planet, Sephiroth, using Jenova cells as a vessel—impales her through the torso with the Masamune, killing her. The White Materia, which Aerith had hidden within her hair, falls into the lake beneath the village.

Although everyone at first believes reaching the Planet is now impossible with the last Cetra dead, they later learn Aerith's prayer had reached the Planet, but Sephiroth is preventing the spell from answering the call. To release Holy, Sephiroth must be defeated but by the time this happens Meteor has already entered the Planet's atmosphere, and it is too late for Holy alone to force the object back without also harming the Planet.

Aerith's spirit summons the Lifestream to supplement Holy's power. Although the clash between the forces creates a magical storm that destroys Midgar, Meteor is repelled, and the Planet is saved. It is unknown what happened to the White Materia afterward, but it can be assumed the White Materia still lies in the bottom of the lake in the Forgotten City.

In Final Fantasy Tactics, there is an Artefact that can be obtained from an errand called White Materia. Its description is the following:

These stones, developed by the ancient Saronians, are the result of experiments in storing knowledge within gems for later generations. They are said to enhance the abilities of the possessor.

The White Materia appears briefly in a task where the Player Turk must find the Materia in the Sector 5 Slums, as Aerith has dropped it while running from pursuing AVALANCHE troops who seek her supposed knowledge of the "Promised Land".

A Materia piece resembling the White Materia appears at the end of Cloud's story and in the ending credits as the representative Crystal of Final Fantasy VII. Cloud acquires it from Sephiroth after defeating him in the Planet's Core. Along with the other nine Crystals, it opens the path to Chaos's domain in the game's final stage. 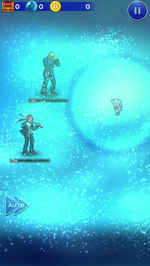 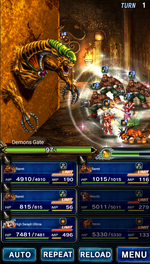