White Mage (The After Years)

Cid Pollendina: Oh, shut up and help me remodel the White Mage (The After Years) page!
Please expand this article into a full one. The following tasks need to be completed:

White Magic
The White Mage is a generic White Mage temporary party member in Final Fantasy IV: The After Years. She is Porom's aide and is sent by her to assist Ceodore.

Porom orders the White Mage and the Black Mage to accompany Ceodore and the Hooded Man to Baron. The White Mage opens the Devil's Road for the party and they arrive in Baron. When they reach Baron Castle, the guards deny them entry and they are forced to enter the castle via the Ancient Waterway. After they sneak in, the mages leave Ceodore and the Hooded Man to fend for themselves and head back to Mysidia.

Later on, the White Mage accompanies Porom and the Black Mage to Mount Ordeals so they can request help from Kain. They find the tomb of Cecil and Golbez's father, Kluya. After having a brief conversation with his spirit, they exit the tomb and are attacked by monsters. Kain rescues them and together they return to Mysidia. They find teh city under siege by monsters. They rescue the Elder and treat his wounds. The White Mage overseed the Elder's healing process while the Black Mage stands guard nearby.

The White Mage joins for a short time during Ceodore's Tale. She also joins during the third part of Porom's tale and she is usable during Porom's Challenge Dungeon. The White Mage is the only character in the game whose portrait image faces right, and away from the player's view.

The White Mage is able to cast White Magic. She learns no new spells as she levels up and has no Band abilities.

The White Mage may equip bows and arrows and staves as weapons and hats, clothes, armlets and one Robe as armors. Due to being a guest her equipment is very limited.

she is equipped with a Staff, a Leather Cap and Leather Clothing the 2 times she joins the party. 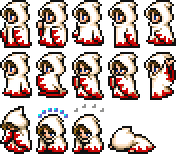 White Mage in the 3D remake version for smartphones.