The White Mage is a Job in Final Fantasy XIV, introduced as the Discipline of Magic Conjurer (幻術士, Genjutsu Shi?) in the original release. Players start as a Conjurer, and then may upgrade to White Mage using the Soul Crystal obtained from the quest Seer Folly after Conjurer reaches level 30. 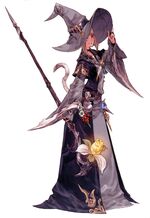 The Conjurer class is defined by wielding either one-handed wands or two-handed canes. At endgame, the available weapons are mostly two-handed canes, while wands are relatively scarce (the strongest as of 2.5 being the Tidal Wave Wand at item level 100).

In terms of late game armor and accessories, Conjurers and White Mages share "Healing" gear with Scholars and Astrologians.

The Healing Gauge received a major overhaul in 5.0 Shadowbringers. The Healing Gauge now fills up over time when battle is initiated as a small light traces along the length of the branch and causes it to glow. Reaching the end sprouts a blue Lily. These Lilies are required to use the new Afflatus spells, first learned at Level 52 with Afflatus Solace. Upon reaching Level 74 and learning the trait Transcendent Afflatus, using consuming Lilies will develop a Blood Lily. After three Lilies, it grows into full bloom, allowing the use of Afflatus Misery.

White Mage and Conjurer appear on cards. White Mage's card is Water-elemental, while Conjurer's is Ice-elemental.

At the initial launch of the original Final Fantasy XIV, Conjurers were somewhat similar to the series's traditional depiction of Red Mages, possessing the full assortment of "standard" elemental spells as well as restorative abilities.