Louisoix Leveilleur: Eorzea was destroyed by a force of unimaginable power raining down from the sky. It is the dawn of a new age!
The following article contains information from a previous version. For the current version of this article, see White Mage (Final Fantasy XIV). 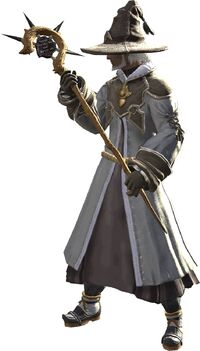 The Conjurer is a Disciple of Magic in Final Fantasy XIV.

Conjurer calls upon elemental forces present in nature and concentrates them to a potency at which spells can be weaved. Through practiced meditation on the essences of creation, conjurers draw forth and absorb aether from their immediate surroundings.

A wand or cane made from unworked wood is then utilized to focus the aether until it manifests as the desired spell. The seat of the Conjurers' Guild lies at the Stillglade Fane in Gridania, where the voices of Eorzea's elementals are said to be most powerful.

The seventh element is you!

Attuned to the essence of all things around them, the conjurers' intimacy with all forms of being enables them to shift between both offensive and defensive magic as needed.

In their original design, Conjurers were somewhat similar to Red Mages, possessing the full assortment of "standard" elemental spells as well as restorative abilities.

The following are a list of abilities usable by the Conjurer class at initial release of the 1.0 version of Final Fantasy XIV.

The following are a list of abilities usable by the Conjurer class after the release of Patch 1.20 in the 1.0 version of Final Fantasy XIV. 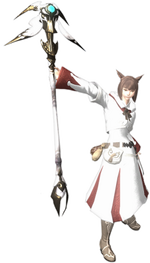 The White Mage Soul Crystal can be obtained by completing the quest Seeds of Initiative that becomes available when the player reaches Conjurer level 30 and Gladiator level 15; it grants new support abilities to augment healing, but only allow the use of Gladiator and Pugilist abilities.

Every White Mage ability can be used only after completing specific quests.