The White Mage is a Job in Final Fantasy XIV, introduced as the Discipline of Magic Conjurer in the original release. Players start as a Conjurer, and then may upgrade to White Mage using the Soul Crystal obtained from the quest Seer Folly after Conjurer reaches level 30.

White Mages wear the typical red and white attire recurring in the series. White Mages are Pure Healers, with high potency healing spells and the only spell to heal a target to full health. They also have high damage potential with their spells, such as Glare, Assize, and especially Afflatus Misery.

While there may be multiple White Mage players in the game, the lore dictates that, aside from the Padjal, only the Warrior of Light may be a White Mage, owing the knowledge about its power to the Crystal that once belonged to the famous White Mage A-Towa-Cant. Canonically, the only other White Mages in Eorzea are Kan-E-Senna and her siblings.

The mages of Amdapor devised the arcane art of white magick during the Fifth Astral Era to counter the destructive black magick of Mhachi sorcerers in the infamous War of the Magi. Focusing upon spells of restoration and purification, the practice of white magic led to great advances in Amdapori society. Intoxicated by their newfound power, however, they created ever more potent magicks to wield until the clash of eldritch energies upset the balance of nature, manifested great floods, and the realm was drowned by the Sixth Umbral Calamity. Both cities were lost, and the magicks that brought about the catastrophe thenceforth adjudged dangerous and forbidden. The ruins of Amdapor were swallowed by the forest - the city and its secrets concealed by the elementals of the Twelveswood.

Some five centuries past, the elementals relented, and allow the legacy of the Amdapori magi to be wielded by a chosen few. The Padjal, revered leaders of Gridania, have since served as the stewards of white magick.

Conjurers and white mages wield staves and rods as their weapons. At lower levels they also have access to one-handed wands, which they can use in conjunction with shields, but these items stop appearing past level 50. Their armor is primarily made up of "Healing" gear, armor with low physical defense and high magic defense that they share with other healer classes.

The Job Gauge was introduced to players in 4.0 Stormblood. The White Mage uses the Healing Gauge.

In Shadowbringers, the Healing Gauge indicates the number of Lilies a white mage has accumulated. Lilies fills up over time (one every 30 seconds) when battle is initiated as a small light traces along the length of the branch and causes it to glow. Reaching the end sprouts a blue Lily. These Lilies are required to use the Afflatus series of spells, first learned at Level 52 with Afflatus Solace. Upon reaching Level 74 and learning the trait Transcendent Afflatus, consuming Lilies will develop a Blood Lily. After three Blood Lilies, it grows into full bloom, allowing the use of Afflatus Misery (acquired at level 76). 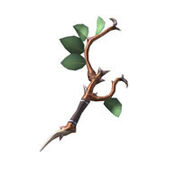 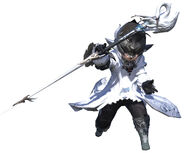