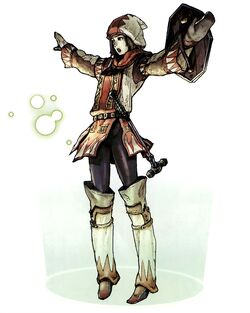 White Mage is a basic job available to all starting characters in Final Fantasy XI. White Mages specialize in curative magic, the removal of just about all status ailments, and defensive magic.

White Magic offers limited access to offensive magic including status ailments, such as Slow, and damaging magic, such as Holy. In normal situations, they would often be called upon to use status ailments but it is rare for a White Mage in a party to attempt to do damage with spells and they are almost never seen on the front-line dealing melee damage. The job of White Mage is thus limited to almost exclusively healing duties.

In addition to White Magic, White Mages possess a number of abilities including Benediction, Divine Seal, Martyr, Devotion to further their abilities in curing and supporting the party.

The five races of Vana'diel can all make a competent White Mage. Elvaan have the highest Mind, thus are able to cure with the highest potency. Tarutaru excel due to their high MP pool, but low HP and Vitality means they are less survivable while low Mind weakens their cures. Hume and Mithra are relatively balanced, offering few strengths and weaknesses although Mithra suffer from slightly lower Mind. Galka have low MP, giving them less to cast magic with, but high HP and Vitality help them be more survivable.

Since White Mage is a basic job, characters can choose to become a White Mage at any time. Characters who wish to start the game as a White Mage will be given a scroll of Cure and an Onion Rod in addition to their adventurer certificate and nation ring (if applicable). 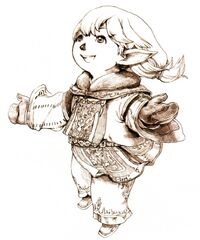 White Mages are the preeminent users of curative and protective magic. As a class with a lot of spells aligned with the Light element, they also have the capacity of dealing significant damage to creatures weak to this element, particularly Undead.

Black Mage offers White Mage some utility as a support job. Not only can it give the White Mage access to spells like Sleep, it also provides them with a decent MP boost and increases MP efficiency with Conserve MP. In more rare situations, Magic Attack Bonus will increase damage from Banish or Holy. Black Mage also offers White Mage the Warp spell.

Summoner becomes a popular subjob for White Mage after level 50. At this point, Summoner offers White Mages Auto Refresh, which will slowly increase MP over time. Additionally, with their high MP and MP Boosts, White Mage with a summoner subjob has the highest MP totals of almost any job other than summoner itself. Avatars can be useful for some mid-level job abilities, such as Aerial Armor from Garuda.

Red Mage is not commonly used for White Mage, since it is not as MP efficient, nor does a White Mage have quite as much MP in this configuration, but it is worth noting that some White Mages will want the benefits of Fast Cast or red mage specific spells, specifically Phalanx, for certain situations. With the increased level cap White Mage will be able to access Convert and Refresh, breathing new life into this subjob.

Ninja is not a common job choice for most White Mages; However, it is worth mentioning that a White Mage with Reverend Mail, access to the weapon skill Hexa-Strike with a Club and plenty of Haste and Strength gear can be a surprising powerhouse of melee damage.

Scholar has been another popular subjob for White Mage with the job ability Light Arts. Light Arts reduces the cost of their spells, spell casting time, and spell recharge time, along with boosting the White Mage's Enhancement and Enfeebling skill to a B+ rank, while Dark Arts allows them to access some Black Magic including Dispel, and most notably, Aspir, along with reducing the cost, cast time, and spell recharge time of the relevant spells while boosting the White Mage's elemental, dark, and enfeebling skills to a B+ rank. They also get access to Sublimation, Scholar's version of Refresh, as well as several useful strategies.

Penury, gained at level twenty, halves the cost of the next white magic spell used. Celerity halves the casting and recast time of the next white magic spell used. Both are compatible with all of the White Mage's native spells. At level eighty the White Mage gains Accession, which turns certain single-target white magic spells into area-of-effect spells at the cost of double MP and tripled casting time. While using Accession with Cure, Protect, or Shell is redundant, the ability to multi-target Regen, Blink, Stoneskin, and status recovery spells is extremely helpful. Stoneskin especially can only be cast on other party members with the help of Accession.

The White Mage appears on cards. 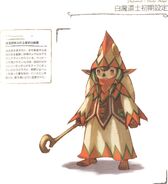 Concept art of the White Mage.

Promotional artwork of the White Mage by Yuzuki Ikeda.