Priests who use white magic to heal and protect allies.

The White Mage is a job in Final Fantasy V, obtained after the Wind Crystal shatters. It is the game's first job to focus primarily on healing and support. The White Mage has less Magic Power than the Black Mage and Summoner, and cannot harness the power of elements outside of Holy with a rare staff as they are unable to equip rods or knives without equipment abilities. Nonetheless, the job is useful in keeping units alive and healthy during tough battles.

Mastering White Mage for all four characters in the mobile and Steam versions earns the player the achievement "Master of White Magic".

The White Mage attire is that of a traditional White Mage from the series: a white robe with a red trim. Bartz and Galuf wear their hoods down. Lenna and Faris wear their hoods up. Krile wears a white cloak with cat ears and red clothes, referencing the Devout class from Final Fantasy III.

The White Mage attire is an indication that Faris is female, before the party even finds out, as she wears her robes the same way Lenna does. This also applies to the Black Mage job.

The White Mage, the Monk and the Oracle are the only jobs that cannot equip knives at all, as there is no "Equip Knives" ability. The only knife they can use is the Man-Eater if they first equip the "Equip Ribbons" ability gained from the Dancer.

White Magic is all about healing the party and granting positive status effects. The only offensive spell the White Mage gets is the late-game Holy spell.

Any job equipped with White Magic Level 1 will gain their character's base Freelancer Magic +15 if their default stat is lower. For each additional White Magic level up to level 6, the Magic bonus is increased by 2 per level, for a maximum of +25 Magic at White Magic Level 6.

Thus, the base Magic stat for a character with White Magic equipped is as follows:

Upon mastery, Freelancers and Mimes gain the White Mage's base Magic unless they already have a higher base from another mastered job.

The job's innate command ability is White Magic, natively able to use all spells of this classification. Leveling up as a White Mage allows the character's other jobs to use increasingly powerful spells in the skillset as well. 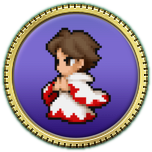