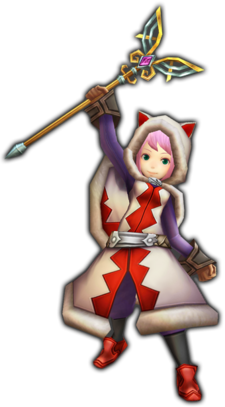 White Mages specialize in healing and support to aid their comrades in a tight spot.

White Mage (白魔道士, Shiro Madoushi?) is one of the jobs available in Final Fantasy Explorers.

The White Mage is unlocked after the 1★ Tutorial Quest, "Ability Mutations Exam". It can be mastered by completing any 10 quests, then the 5★ quest "Mastery Trials: White Mage".

White Mage is categorized as healer. They can initially equip staves and tomes. After mastery, rods and dual daggers can be equipped.

In solo mode a White Mage should have a way to inflict damage by using offensive spells, mainly offensive White Magic as Water, against enemies. In online mode, White Mage excel in healing and buffing offensive allies, using raise can prevent party members from spending time by reviving themselves.

White Mage unique ability, Beseech, creates a temporary AP recovery zone that affects any ally who enters it. The passive ability, Charity, increases area of effect and reduce the accrual of malice when you use recovery magic.