The White Mage is a light-elemental Eidolon that appears in Final Fantasy Dimensions II. It can be obtained as a signet for Aemo to equip by completing the "Golden Scintillation" main quest during Chapter 5 of the Eureka arc.

The White Mage is based on the recurring job class in the series, being a master of support magic and punishing the wicked with their holy magics. The signet artwork's appearance depicts a young female White Mage with blonde hair wearing white robes with red triangular lining and wielding a staff. As the signet evolves, her robe and boots begin to have more elaborate designs on them. The signet's final artwork depicts the White Mage as a Devout, donning the traditional Cat-Ear Hood robe of the job, and White Magic emerging from her staff.

The White Mage's special attack is Blessed Rebirth, which revives all KO'd allies and restores 1/2 of max HP to all party members. Summoning The White Mage costs 3 bars from the Summon Gauge.

The following are the abilities Aemo can learn from the White Mage:

In the original free-to-play versions, the White Mage signet was a god-tier light summon that could only be obtained through the game's summon draw shop. It allowed the wielder to use the same abilities as in the premium release and required god stones to evolve. It was an SSS rank summon and could be equipped by any party member.

In addition, a player that drew the White Mage signet from the shop would also obtain a costume voucher redeemable for a White Mage-themed costume for Aemo, Jornee, or Maina. 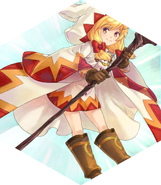 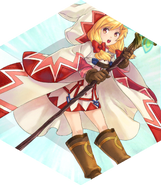 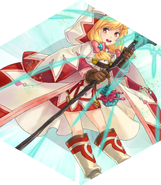