Relm: I couldn't miss the chance to practice my drawing!
This article is in need of a few pictures. Perhaps you can help by uploading a picture of Tiz as a White Mage. 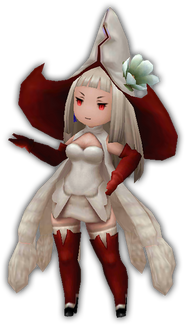 Heal and protect allies with the power of white magic.

The White Mage (白魔道士, Shiro Madōshi?) is a job class in Bravely Second: End Layer. It is obtained after defeating Holly Whyte.

The White Mage's primary strength is the ability to cast White Magic, which is primarily focused on healing and buffing spells, and some offensive Wind spells. The White Mage's stats are geared towards magic power, magic defense, and MP. A character able to cast White Magic is critical in virtually any party to keep the party members alive—while some other jobs have healing abilities, the White Mage is the most effective at it. Their innate ability is Angelic Ward.

The White Mage's specialty is Angelic Ward. Its job command is White Magic.

This gallery is incomplete and requires Tiz as a White Mage added. You can help the Final Fantasy Wiki by uploading images.
Bravely Second: End Layer jobs and abilities
Retrieved from "https://finalfantasy.fandom.com/wiki/White_Mage_(Bravely_Second)?oldid=3245519"
Community content is available under CC-BY-SA unless otherwise noted.