Battling for a good cause and helping the weak... It's been an honor travelling with you!

5★ - No. 8015: A knight from the icy highlands, who was known for his generosity and nobility. His parents were residents of two neighbouring countries that shared a long history of war. From his father, Noel learnt how to pilot a robot whilst his mother trained him in the arts of magic. During a short period of time when the two countries were at peace, Noel was able to travel freely between them, helping the poor he met along the way by providing them with gifts.
6★ - No. 8016: A knight known for his generosity and nobility. Always seen riding atop a gold and white robot, he is known by people as the "White Knight." When war broke out between two neighbouring countries, the homelands of his parents, Noel gave up his life to defend the powerless from the soldiers. Tales of his brave sacrifice quickly spread, eventually leading to the end of the war. After his death, residents of the two nations celebrate the Festival of the White Knight annually to remember him and to remind themselves of the importance of peace.
Entries for different versions of White Knight Noel.

White Knight Noel's stats at his highest levels are as follows (with no passive abilities taken into account), along with the maximum amount of stat points that can be increased through pot-enhancements: 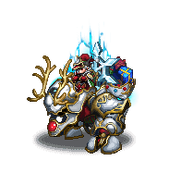