Friendly creature quick to aid those in need.

White Hare is an Esper in Final Fantasy XII: Revenant Wings. It is the rank 1 Holy Ranged summon, and costs 12 Affinity points to summon. The red White Hares are ally Yarhi, while the blue ones are enemy Yarhi.

Its normal attack, Cure, restores HP to one ally. 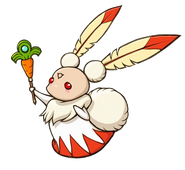 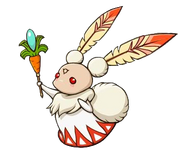