Non-player character
White is a character from Final Fantasy Mystic Quest. His name appears in the Japanese and European manual. This enigmatic old man flies on a cloud and occasionally gives advice to Benjamin.

White guides Benjamin in an escape from a collapsing mountain when the Crystals are attacked by the Dark King. He declares that Benjamin is the hero of prophecy, though he amends it to being more of a guess when pressed. He informs Benjamin of the nature of Focus Tower and the Dark King's intentions.

White appears several more times. Whenever Benjamin asks for guidance, White gives a brief answer without any details or instructions on how to accomplish it. The first time Benjamin asks him what to do, White only replies "Go save the Crystals!" and leaves on his cloud. 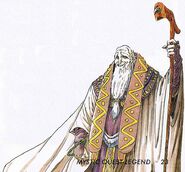