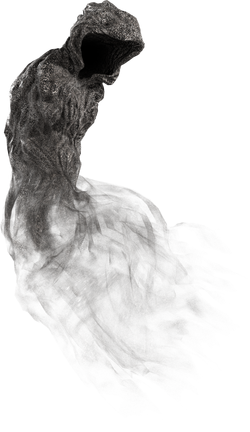 An accretion of Whispers, the so-called arbiters of fate. The creatures appear when someone tries to alter destiny's course. They are connected to all the threads of time and space that shape the planet's fate.

In-game description of the Whisper Harbinger

Whispers (フィーラー, Fīrā?, lit. Feeler), also known as the arbiters of fate (運命の番人, Unmei no Bannin?, lit. keepers of fate), are beings born of the planet said to enforce the course of destiny. They appear in large gatherings whenever events stray too far from fate's intended path.

Whispers are invisible until someone who can see them (such as Aerith Gainsborough) makes contact with another person. When visible to the naked eye, they appear as flying, gray cloaks with nothing inside and typically appear in dense swarms. They gather to block people's ways, guide those who stray from their intended path, and may even attack those who defy their fate too strongly. Though they are supernatural and usually invisible, they are not omnipotent and have a physical presence in the world; they can fail to do what they set out to accomplish, or act too late, especially when met with opposition, and can be harmed and thus, destroyed.

The Whispers appear whenever events start to diverge from the original plot of Final Fantasy VII. According to Whisper Harbinger's description, they appear "when someone tries to alter destiny's course"; that someone is implied to be Sephiroth. The only person who seems to understand what the beings are is Aerith. Because of the apparent connection between the Whispers and Aerith, she seems to have knowledge of the original Final Fantasy VII timeline; she knew Cloud Strife was a mercenary, but she hid this knowledge by claiming she guessed from his weapon. She knew Cloud was in SOLDIER even though he had not told her yet, and knew Marlene's name without Tifa telling her. She knew Barret was Marlene's father when she called out for "daddy", and even warned Cloud from falling in love with her because it would only cause him pain. She knew Red XIII was their ally even if he was acting aggressively, and when she placed her hand on his head, he gained knowledge of the Whispers and was able to relay it to the others.

After the bombing mission at Mako Reactor 1, Cloud runs into Aerith in the streets of Midgar, being harassed by invisible beings. The Whispers disperse, and Aerith offers Cloud a flower. As the Whispers return, they become visible to Cloud when Aerith pleads for help and grabs his arm. Cloud draws his weapon, attracting the attention of the Shinra Public Security Division, and Aerith runs off with the Whispers chasing her while Cloud deals with the soldiers.

When Yuffie Kisaragi comes to the Sector 7 slums in "Episode INTERmission", she is unable to enter the Seventh Heaven bar, being blocked by a mysterious wind. This is implied to be the Whispers, which she cannot see.

The Whispers appear in the Sector 7 slums after Barret has decided not to hire Cloud again for Avalanche business. A Whisper hovers over a sleeping Cloud, seemingly talking to him in Sephiroth's voice. Tifa rushes to awaken him, and the two rush to the Seventh Heaven bar that is being swarmed by the Whispers, but the beings try to block their path, and Jessie gets hurt. After she is injured, the Whispers immediately disperse, with Barret blaming Shinra's mako reactors for turning nature upside down and creating hostile beings. Barret hires Cloud on the spot to be Jessie's replacement on the next bombing mission, unwittingly falling in line with the destiny the Whispers are trying to enforce.

During the bombing mission, Cloud gets separated from Avalanche and falls into the Sector 5 slums church. He reunites with Aerith, who recognizes Cloud as a mercenary for hire and wants him to become her bodyguard. When Reno of the Turks comes to the church to kidnap Aerith, Cloud subdues him, but the Whispers appear to stop Cloud from killing Reno, with Aerith also telling him not to do it. They then block Reno from pursuing Cloud and Aerith as they escape the church.

The Whispers slow Cloud, Tifa, and Aerith down when they rush back to Sector 7, attempting to stop Shinra forces seeking to drop the Sector 7 plate. The Whispers appear around Jessie, Biggs, and Wedge when Avalanche defends the Sector 7 pillar, but Wedge survives, changing destiny despite the Whispers' attempts to ensure his death. Tifa asks Aerith to take Barret's daughter Marlene somewhere safe, but Aerith already knows her name without anyone having told her.

Cloud, Barret, and Tifa return to the Sector 7 ruins looking for survivors. They find a secret Shinra testing site, but the Whispers carry them away just as Cloud is about to remember more of his past. If Cloud meets with Aerith in a dream later, she says that everyone will die eventually and that Cloud shouldn't fall in love with her.

Cloud, Tifa, and Barret storm the Shinra Building to rescue Aerith, who has been kidnapped by Shinra, but more and more Whispers begin to appear as Sephiroth arrives in the body of one of his clones. When Aerith "tames" Red XIII, one of Professor Hojo's research specimens, Red XIII gains intimate knowledge of the Whispers and their purpose and relays it to the party. When in her old room in Hojo's lab, Aerith tells the others that she feels lost and confused, and that whenever the Whispers touch her she loses another part of herself. When Hojo is about to tell Cloud that he was never in SOLDIER, the Whispers carry the former away, preventing him from finishing his sentence. The Whispers restore Barret to health after Sephiroth impales him, but they also attack Wedge, who has come to the Shinra Building to help Barret's group. Though not directly shown, it's implied the Whispers throw him out the window of the building as the sound of shattering glass is the last thing heard when the screen fades.

The Whispers eventually overwhelm the entire building, which Cloud, Tifa, Barret, Aerith, and Red XIII marvel at from afar. Rufus Shinra is puzzled by the phenomenon, but Tseng, who is with him, is unable to see the Whispers. Cloud senses Sephiroth at the end of the Midgar Expressway, and the others can also see him. Aerith explains he is going to try and destroy the planet and that Shinra is not their real enemy. Aerith says that they must defeat Sephiroth no matter what it takes. Sephiroth slices through the swarm of Whispers, creating a pathway to "singularity", a doorway into a new destiny where the future is not fixed. After Aerith interacts with the portal, Cloud and friends follow and end up in a distorted version of a destroyed Midgar, where the Whispers combine into a Weapon-like colossus that spawns three constructs with the ability to merge into a Bahamut-like form. Throughout the battle, they show images of events that will occur: Aerith's death, Meteor hurtling toward Midgar, and an older Red XIII overlooking the ruins of Midgar.

The group defeats the Whispers before battling Sephiroth, who explodes into Whispers upon being defeated. Sephiroth takes Cloud to a metaphysical dimension he calls "the edge of creation" and asks him to forge a new destiny together with him. Cloud refuses but Sephiroth spares him after besting him in combat. They return to the real world where Cloud and his friends leave Midgar together to hunt Sephiroth down and find out what his plan is.

The Whispers' defeat creates deviations to the timeline: Biggs survives the plate collapse, while Zack Fair survives "his last stand" and brings Cloud to Midgar, later visiting the Sector 5 church looking for Aerith. Aerith is unsure what the future will hold, as the sky above them is unknown. Sephiroth is motivated by his will to defy destiny and seems to have goaded Cloud and his friends into fighting the Whispers to open a path to a new future.

The Whispers are fought as enemies in the Sector 7 slums during "Sudden Attack" in Chapter 4, "Mad Dash", and at the Sector 7 train station when the party returns there to defend the pillar. in Chapter 12, "Fight for Survival". Three large Whispers that can form into a dragon are fought as part of the final battles in Chapter 18 "Destiny's Crossroads" alongside a giant Whisper that towers over the skies.

"Whispers' Theme" plays during scenes associated with the Whispers and is track 21 of the second disc of Final Fantasy VII Remake Original Soundtrack. It was composed and arranged by Masashi Hamauzu. An ominous theme, it starts slowly but quickly builds in intensity, with a chorus of chanting added. "Whisper's Theme" is also featured within "One-Winged Angel - Rebirth", the game's final boss theme, towards the ending of the track. Additionally, an orchestrated version of the theme features in "Credits", the game's closing credits theme.

Scenario Writer Kazushige Nojima requested the Whispers look ghostly to make them feel eerie. At first, the Whispers were to be "like sand", crumbling while also remaining in form, that more evoked the feeling of wind. Director Tetsuya Nomura has described them as tangible, with a meaning behind them being this way. Nomura confirms that the ability to see the Whispers is due to Aerith's direct touch, but wanted to keep secret whether Aerith could always see them.[2]

The Whispers are known as "Feelers" in Japanese, with the reason for the name deriving from to sense and to contact.[3] The Final Fantasy VII Remake Ultimania elaborates that the ability to see the Whispers depends on the person, and that it's possible to suddenly become able to perceive them after touching a "special" person.[2]

The "flash forward visions" the Whisper Harbinger induces in the confrontation against the party are reused footage from Final Fantasy VII: Advent Children, which is why some elements have slightly different designs than seen elsewhere in Remake, like Cloud's Buster Sword. The scenes used are from Marlene's prologue narration summarizing the events of Final Fantasy VII.

Whispers at the Sector 5 slums church.

Cloud and a Whisper.

Whispers swirl around the Shinra Building.