The Whirlwind Maze is a location at the bottom of the North Crater in Final Fantasy VII. It is a barren area filled with massive amounts of Mako sent by the Planet to heal the wound that is the North Crater. There are parts of the Maze where the player must dodge lightning bolts at the right time, or be knocked back and have to fight an enemy. It can only be visited once by climbing Gaea's Cliff.

Sephiroth waits for most of the game inside a crystal in the Northern Cave, beyond the Whirlwind Maze. He is awaiting the coming of the Black Materia to be brought to him by his clones in a "Reunion". Cloud Strife travels to the Whirlwind Maze with his party. Jenova, in Sephiroth's form, lures the party across the Planet until finally taking them here.

Cloud and his party descend down the crater walls to find and defeat Sephiroth. As they travel down, they slowly see all the other Sephiroth Clones fall from exhaustion, or be killed by Sephiroth himself. Finally the party reaches Sephiroth himself. Only three party members, including Cloud and Tifa Lockhart, can go forward, so they leave the Black Materia with a remaining party member.

Sephiroth shows Cloud and his party Nibelheim, back before the Incident. Sephiroth shows Cloud he was never in Nibelheim five years previous, rather, it was another, Zack Fair. Cloud is confident it is just an illusion to trick him, but Tifa, the only other party member to be in Nibelheim, does not refute Sephiroth's claims. Sephiroth tells Cloud he is just another drone like all the other mindless Sephiroth Clones. Cloud breaks down emotionally and Jenova, in the guise of Tifa, tricks the party member whom the Black Materia was left with to give it up into the enemy hands.

Rufus Shinra and his group of Shinra Executives, land in the Northern Cave using the airship Highwind. Seeing all the abundant Mako, Rufus thinks the Northern Cave to be the Promised Land. Cloud appears, appealing to Professor Hojo to tell him what his number was in the Jenova Project. Hojo laughs off how a specimen he considered a "failure" turned out to be the only successful Sephiroth Clone, but cannot recall much about Cloud.

Cloud personally hands Sephiroth the Black Materia, which then summons Meteor. The Planet summons its protectors, the Weapons, to rise and defeat the threat, creating a massive explosion of energy. Rufus and his entourage flee the chaos on the Highwind, taking Tifa and Barret Wallace with them. Cloud is flushed into the Lifestream, and leaves the party temporarily.

"The Great Northern Cave" plays inside of the Whirlwind Maze. 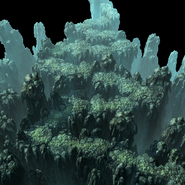 [view · edit · purge]A whirlwind is a weather phenomenon in which a vortex of wind (a vertically oriented rotating column of air) forms due to instabilities and turbulence created by heating and flow (current) gradients.