The Western Keep is a location from the original Final Fantasy. It is located northwest of Elfheim.

The Warriors of Light meet a king here, who asks them to retrieve his Crown from the Marsh Cave. Then they bring it back to him, he reveals that he is really Astos, and attacks. He is defeated and the Warriors of Light recover the Crystal Eye of Matoya.

The background music that plays inside the Western Keep is called "Ruined Castle". It is a remix of the Castle theme.

The ruins of Western Keep can be found in the overworld of Dissidia 012, in the Melmond Fens area. In the Confessions of the Creator Scenario, a Teleport Stone is located there.

Entering Elfheim, the Warriors of Light learn that the dark elf king Astos has ensorcelled the prince of the elves in a magical slumber. The search for Astos begins.

The Western Keep is referred to as Astos Castle in the episode. Astos under the disguised of a friar as the Light Crystal (Crystal Eye) guarded within his castle. 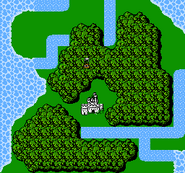 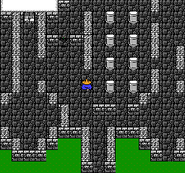 The ruins of the Western Keep in World B in Dissidia 012.