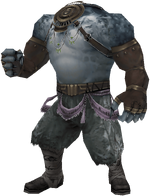 Wendigo is an enemy fought in forests around Timber, many areas in Galbadia and in the Stairway Hall and Passageway of the final dungeon. They use physical attacks, meaning they can be defeated easily using Blind. Wendigo has a Triple Triad card.