Wen Kinoc is a non-playable character in Final Fantasy X who has a cameo role in Final Fantasy X-2. He is a maester of Yevon and friend to fellow maester, Seymour Guado. According to the Final Fantasy X Scenario Ultimania, Kinoc is the Minister of Military Affairs, which is in charge of the general military command. Kinoc doubles as head of the Warrior Monks and oversees the Crusaders. He was once a Warrior Monk himself and good friend of Auron, though the two have since drifted apart.

Kinoc is a bald middle-aged man with soft features and round cheeks. As a maester of Yevon he wears a floor-length pale yellow robe with white sleeves and an elaborate front, decorated with the symbol of Yevon. He wears a skullcap held with a diadem.

Kinoc puts forth the front of a benevolent helper of Spira, but in truth he joined Yevon to gain power and enjoys being in a position of authority. He wants Spirans to believe Yevon is the only salvation available against the threat of Sin. Fear of losing his position and thus the influence he gains from it is what makes him paranoid and callous. In charge of the Yevon armed forces, Kinoc acts as something of a military tactician. Though Yevon's teachings forbid machina use, Kinoc's forces wield them for weapons; Kinoc is unbothered by the hypocrisy, saying that exceptions to the rule exist.

Following Auron's fall from grace within the clergy, Kinoc took the promotion for second-in-command originally meant for his friend, and rose to the title of maester within seven years. Though he gained wealth and power, Kinoc began to hunger for more while fearing of losing it.

One of his projects as maester was forming an elite military force for Yevon, the Crimson Squad, which Kinoc assembled under the guise of fulfilling the society's demand for a stronger army. However, his true intention was to privatize the Crusaders by inserting his hand-reared Crimson Squad members. Feeling threatened by the newly appointed Maester Seymour who was gaining power, Kinoc set his eyes on Vegnagun, a mysterious machina weapon of ancient times.[3] When rumors of a vengeful presence inhabiting the Den of Woe below Mushroom Rock Road circulated, the reports of people seeing the illusion of a "gigantic machina" within intrigued Kinoc. He sent the Crimson Squad aspirants into the den to collect information on the Vegnagun on the same day as the Operation Mi'ihen he was also overseeing would take place, so any casualties would go unnoticed, as he knew the operation would be a disaster.[3]

Overseeing Operation Mi'ihen, Kinoc is glad to see Auron again, who is now traveling with Summoner Yuna as one of her guardians, though he notes Auron has changed. Auron is surprised Kinoc has been made a maester. Operation Mi'ihen was to be a joint operation with Yevonites and the "heretical" Al Bhed, seemingly as an act of reconciliation between the two factions, but in truth, Kinoc wants the Al Bhed machina to fail at defeating Sin to further cement Yevon's role as the only hope for salvation in Spira (which Auron suspected after the operation's failure).

At some point, Kinoc learned that all but three of his Crimson Squad candidates, as well as their sphere recorder, died in the Den of Woe. He ordered for the quartet's execution to conceal his failure, as it could place his position in jeopardy. Kinoc ordered the Den of Woe sealed with magic.[3]

Kinoc later oversees the wedding of Yuna and Maester Seymour in Bevelle. He orders the Al Bhed's airship shot down as it attempts to disrupt the ceremony, and the airship departs. Kinoc enlists his Warrior Monks to hold off Yuna's guardians who are looking to save her from the ceremony. Holding the party at gun point, Kinoc almost decides to kill Auron when he calls him hypocrite for using machina, banned by the temple whose dogma Kinoc is supposed to uphold. Yuna's escape on Valefor allows the guardians to flee with Rikku's flash bomb to meet up at Bevelle Temple. After Yuna obtains the aeon Bahamut from its Chamber of the Fayth, Kinoc arrests Yuna and her guardians with the promise of a fair trial.

Two years later the Crimson Spheres surface, detailing Kinoc's attempted formation of the Crimson Squad, and the attempt he made on the lives of the surviving Crimson Squad candidates—Nooj, Gippal, Baralai, and Paine. While investigating the Via Infinito, Yuna, Rikku and Paine find Kinoc's restless spirit before he transforms into the fiend Aranea.

Kinoc's fiend form, Aranea, is fought as an optional boss in Via Infinito in Final Fantasy X-2.

He is voiced by Roger L. Jackson in the English version, who also voiced Gramis Gana Solidor in Final Fantasy XII. 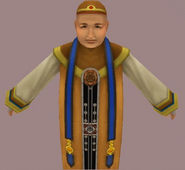 Kinoc, with Seymour and Mika.

Kinoc and Auron, 10 years ago.

Kinoc as the commander of the Crimson Squad.