Dungeon prison of a scion once summoned by Feolthanos. Fearing its terrible might, Feolthanos sealed the beast within, where it remains even now.

The Well of Whispered Oaths is a optional location in Final Fantasy XII: Revenant Wings, located in the Keep of Forgotten Time. It houses some of the most powerful bosses and is where the player battles Zodiark.

The optional dungeon Midlight's Deep is available in the US and PAL versions. It consists of ten floors and at its end lies Yiazmat. Each time the dungeon is finished, it boosts the power of the sword Anastasia, a weapon equippable by Vaan.

A scion of peerless strength has waited in the hidden recesses of the keep, sealed away by the Eternal for fear of the power it wields. What horrible secrets does the lord of the scions hold?

This is a battle against Zodiark. Defeating the scion will unlock him on the Ring of Pacts. 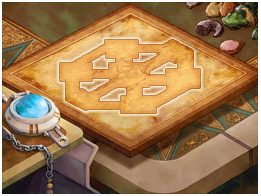 The dungeon extends untold reaches beneath the keep. The creature that waits in its depths is said to possess the power to defy the gods themselves.

As in Final Fantasy Tactics, Midlight's Deep is a multi-floor dungeon with an ultimate boss at the final level. Between each level the player is given the opportunity to access the Group Leader and Yarhi selection panel to prepare anew. An opportunity to save after every battle is also given.

Each floor bears the same basic terrain design, though several platforms and ethereal bridges change between each map. Enemy Yarhi are randomly picked in most fights, and sometimes certain floors may be skipped during a playthrough of the entire dungeon. Each floor awards 50,000 EXP to every character who participated in the battle and 10,000 EXP to each character who did not.

This is a Soul Crystal battle against five enemy Leaders and their Yarhi. One of the leaders is a Berserker, an upgraded form of the Warrior class.

The player characters begin in the center of the battlefield, and each corner of the hexagonal field are occupied by Great Malboros and volatile Mom Bombs. Throughout the fight, several more Malboros will spawn in the middle area. When a total of 21 Malboros have spawned in the middle area, any remaining enemies will attack the party. There are no Summoning Gates present.

Several enemy leaders, including the Seeq War-chief, have a stronghold in the middle of the field, while the player forces are divided to the northeast and the southwest. The War-chief need only be felled to win.

A level-99 single Rank III Esper is the focal enemy of this floor, and acts as a Group Leader. Yarhi of many different types will appear to assault allied leaders immediately at the start of the battle, and the two Rank II Espers are also level 99. There are no Summoning Gates, and the battle ends when all adversaries have been quelled or an unknown time limit runs out.

The Group Leaders are copied detail for detail and pitted against the player in this Soul Crystal fight. However, allied Yarhi are predetermined, and the opposition will not necessarily mime every move.

Only three Group Leaders are allowed for this fight, and allied Yarhi are not summoned, nor are Summoning Gates present. The objective of the battles is to open all the treasure chests without incurring the wrath of the wandering Bahamut or falling to the packs of Yarhi gathered around each chest.

This floor is packed with chocobos of all sorts. A quintet of large and silver-plumed Tricksters serve as Group Leaders and can call many lesser chocobos from their own Summoning Gates. To claim victory, all six enemy Summoning gates must be captured, and the allied Soul Crystal in the center of the map must be protected at all costs.

The party controls a lone Summoning Gate in the area's center, and repetitive hordes of enemies will spawn from the outside perimeter, including a rather nasty pack of Infernal Wolves that can mass-confuse the party.

Advanced enemy Leaders control this floor, and all pack a deadly punch replete with Yarhi. They will bond together and initiate an attack if left alone for too long. The opposition also has the unfair advantage of five different Rank II Espers in their Esper Troupe.

Following in the footsteps of Final Fantasy XII, the superboss Yiazmat appears on the final floor of Midlight's Deep. The famed dragon is exceptionally weaker than his incarnation in Final Fantasy XII but still poses a serious threat.

Yiazmat will remain dormant in the center of the area unless he or the four Carbuncles flanking him are provoked. The lone Summoning Gate present is at the northeast side of the map, and Rank II Espers will constantly spawn from the edges of the field until Yiazmat is defeated. It is best to clear out all other enemies, obtain Quickenings, fortify all ally Yarhi, and buff healthily before attempting to lay siege to Yiazmat and his formidable onslaught of destructive spells. Because the dragon is aligned with the Lightning element and is a ranged unit, a team of Golems and a Rank III Melee Yarhi led by Basch or Vaan are best to directly attack Yiazmat.