This is a well. You might think that there is something to it.... But in fact it is just an ordinary well.

Description in the NES version

Wells are a recurring type of location found throughout the Final Fantasy series. Wells are often found in towns and are usually just part of the scenery, with no gameplay function. However, in some appearances they can be entered, or have story relevance. The appearance of wells in the series has become scarcer since the evolution from sprite towns to 3D models.

The appearance of the first well in the series is made more notable since interacting with it will deliver a message about it being just an ordinary well. Many have erroneously thought this to be a reference to the Dragon Quest series where wells tend to have a purpose. However, at the time of the first Final Fantasy's publication (1987), explorable wells had not been introduced to the Dragon Quest series yet, the first being in Dragon Quest IV (1990) where a well played a pivotal role in an early quest.

The first well is in the town of Cornelia, but it is not the only well in the game. Every well gives the same message. The Final Fantasy Origins message was changed to "A well. Not at all important".

In the Matter and Materials section of the Arcane Labyrinth in the game's 20th Anniversary and iOS releases, the player must speak to the miner to find Mythril on a well and return it to him.

The town of Ur features the first well that can be entered. It is hidden behind trees in the town. The player can enter to discover three Potions. In the 3D remake, the Legendary Smith can be found in the well.

The well in Agart is in the center of the town and can be used to access the Underworld if the player has acquired the Key of Magma.

The well in Agart returns in the center of the town.

In Quelb one of the werewolf villagers claim a strange voice is emanating from inside a well. If the player interacts with the well, an old man will pop out and request the player capture a frog for him. If the player catches a frog (preferably a Kornago) and pays the old man 10,000 Gil he will give the player a Kornago Gourd.

Wells appear in a few locations around the world.

Tifa: Look, the well. Do you remember?
Cloud: Yeah...back then. I thought you would never come, and I was getting a little cold.
Tifa and Cloud talking about a well.

A water tower in Nibelheim is the location of a flashback scene between Cloud and Tifa. According to the Crisis Core Complete Guide the tower is the village's main source of water; the large wooden cask catches rain water, and filters it to supply the townspeople with water to use in their daily lives. Though it is a water tower, and the Japanese calls it as much (給水塔, Kyūsuitō?), the original English localization refers to it as a well.

There is also a well in the Corel Prison. The only thing present in the well is an empty treasure chest. There is the skeleton which resembles a Guard Hound, and in the original Japanese version, the player could fight Guard Hound-type enemies called Test 0 in the well that do not attack the player and yield high AP, EXP, and gil. It is assumed to have been something the programmers accidentally left in since it is not present in any other releases. In other releases, the player can fight four 2-Faced enemies at a time, which is the only possible encounter in the well. There is another well as part of the background in the area where Dyne is fought.

In the Temple of the Ancients there is an area called the Well of Knowledge. Looking into the well shows the party a flashback of an event in another area of the temple.

The well in Nibelheim is still in place and the player can get the Phoenix Materia from it, which is also required to get the Genji Armor. This is also the first of the Seven Wonders of Nibelheim.

One of the Stellazzio coins is hidden in the wishing well at the entrance to Treno. Throwing money in the well makes the person "feel happier", until after having thrown money in thirteen times, the player obtains the coin. Throwing 10 gil into the well 50 times has the "thug" nearby steal the money (after the player exits the screen and returns) and buy a new Tetra Master deck (he goes from deck #11 to #12)

Another well is located in the village of Dali. During the party's stay, Zidane can observe some kids around it claiming they can hear chocobo noises coming from inside. Later, the party discovers a secret underground facility from which the chocobo sounds originated.

Mount Gulug has a large broken-down well that can be used as an elevator.

There is a well in the Farseers' settlement in the Dying World 700 AF. It contains a box with the Ultima Brand fragment that rewards the player with 800 CP. To get the treasure, the player must throw Mog into the well.

There is a well at the area opposite the Coernix Station - Cauthess. It is covered by an iron grid.

There is a well at Cape Caem. It is covered and there is a bucket next to it. The player can pick up a Glass Gemstone by it.

Preceding the events of Final Fantasy Tactics, the day Saint Ajora Glabados was born in Bervenia, Lesalia, he walked to a well and said: "A calamity shall soon befall this well. Seal it up at once, that none may drink of it." All those who drank from the well in the days after were taken away by a plague.

Wells are battlefield objects that only airborne units can pass over; no unit can land on a well, flying or not. Wells are the focal point of Mission 216: Odd Places, undertaken at the Adventurer's Rest in Camoa. This repeatable quest features four wells, any number of which may be present during each repeat of the mission.

Investigating a well unlocks a new sub-location in either the Neslowe Passage, Goug, Sant D'alsa Bluff, or Kthili Sands, and an investigation of a well takes the party to that sub-location. Therefore, Odd Places must be repeated four times in order to unlock all four sub-locations, all of which, interestingly, are volcanic in nature.

There's a well in the middle of Foresta.

A well can be found in Topple, the first town, it is located right next to a house. Another one is found in Menos and Ish.

To the east of the village Verde is the Forest Hut in the World of Darkness, a well can be found near the house. There's also a Well in Capo, Kurgis, and Matagi.

Inside the well in Ur from Final Fantasy III.

The well in Agart from Final Fantasy IV (GBA).

The well in Agart from Final Fantasy IV (iOS).

The well in Quelb from Final Fantasy V (GBA).

A well outside Duncan's Cabin in Final Fantasy VI.

The well in Treno in Final Fantasy IX. 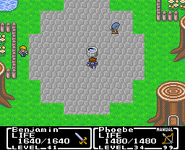