Relm: I couldn't miss the chance to practice my drawing!
This article is in need of a few pictures. Perhaps you can help by uploading a picture of ability images, if possible. 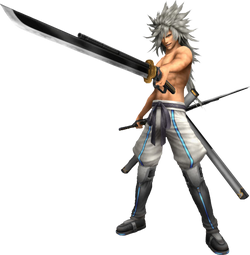 Weiss Empowered, known in Japan as Weiss with Omega's Power Dwelling Within (オメガの力宿りしヴァイス, Omega no Chikara Yadorishi Vaisu?), is a boss that is fought by Vincent at the end of Chapter 11 of Dirge of Cerberus -Final Fantasy VII-.

The fight against Weiss Empowered has two phases. In the first phase, for plot purposes, Weiss takes very little damage from Vincent's attacks, moves at high speeds, and is able to deplete large amounts of Vincent's HP with a single strike. Phoenix Downs do not activate in the first phase of the fight against Weiss Empowered; as such, Vincent must lose.

In the second phase of this boss fight, Weiss Empowered uses devastating combos and energy attacks to damage Vincent; these often protect Weiss from damage while they are being executed. Vincent should only shoot at Weiss when the boss is standing completely still, and since this is the last battle in which he has a serious chance of losing, he can use any MP, items, or Limit Breaks available to him without fear.

Retrieved from "https://finalfantasy.fandom.com/wiki/Weiss_Empowered?oldid=3270451"
Community content is available under CC-BY-SA unless otherwise noted.