Weiss the Immaculate is a member of the Tsviets and the secondary antagonist of Dirge of Cerberus -Final Fantasy VII-. He appears in Final Fantasy VII Remake Intergrade as a new secret boss that can be battled in the Shinra Combat Simulator.

A mysterious SOLDIER who commands Deepground, Weiss declared a hunt on the world three years after the Meteor crisis. He received the title of emperor, as he is the strongest Tsviet, as well as the first member. Deepground soldiers fear his power and follow him; however, they rarely see him directly. He has a deep bond with his younger brother, Nero the Sable.

Weiss is tall with a muscular build and shoulder-length, spiky white hair sticking up in all directions and partially covers his face. His eyes are blue with yellow rings around the pupils. His upper body is bare and he wears white pants tied with a black sash similar in appearance to a karate uniform, and knee-high boots. His Omega form adds a metal skirt resembling Samurai armor. Weiss often sports a broad smile during battle or when he gets excited. In Final Fantasy VII Remake Intergrade, he wears a white mako coat with black lining (with its design reminiscent of Sephiroth's) and sheathes his sword revolvers across his back. When mimicking the other Tsivets, the lights on his outfit change color.

Weiss wields a pair of lever-action sword revolvers forged by Argento. Though only officially referred to as "Weiss's weapons", they are identified by the emblems on their hilts: Heaven (天, Ame?) on the one carried in his right hand, and Earth (地, Tsuchi?) on the one carried in his left. Sometimes referred to as gunblades by fans, Weiss's weapons are more accurately compared to various real world pistol swords that attempted to combine firearms with edged weapons. In the Final Fantasy VII 10th Anniversary Ultimania, the weapons are described as, "a set [of weapons] that combine a revolver-type gun and a katana, with the reload action pictured in the concept art".

When fighting against Omega Weiss, he uses different swords, a pair of long katanas similar in design to Sephiroth's Masamune.

Although his official date of birth is unknown, taking into account the dates of the Jenova Project and his younger brother Nero's age, Weiss is probably around 24 years old.

Much of his personality was likely affected by being under Professor Hojo's control, but Weiss harbors a sincere hatred for humans, much like the other Tsviets, and is particularly scornful towards scientists. Weiss is calm, charismatic, and confident. These traits, combined with his leadership skills, make him persuasive. He displays psychopathic traits and cares little for his subordinates' well-being, even delighting in their deaths as much as those of his enemies. He is arrogant, brash, reckless, sadistic, and perceives people to be only as useful as they can further his agenda. He is, however, affectionate towards his younger brother, Nero, whom Weiss describes as "the only person who ever loved him".

But, will he accept his fate willingly?

In Crisis Core -Final Fantasy VII-, Weiss and Nero appeared soon after Zack Fair defeated Genesis Rhapsodos, wearing SOLDIER First Class uniforms with the Deepground SOLDIER crest. They took Genesis's body away in a helicopter, as though previously unacquainted with Genesis, Weiss and Nero know that they, along with the other colored Tsviets, were spliced with his genes.

Genesis, however, ends up sealing himself in a cavern below Midgar.

There is nothing that can destroy me. Nothing. 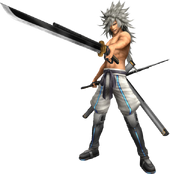 In Dirge of Cerberus -Final Fantasy VII-, during the events of the online multiplayer mode, Weiss was restrained by chains attached to his throne inside Mako Reactor 0. He told the Restrictor he would like to try out his new swords. After the Restrictor broke the chains, Weiss took hold of his swords and exclaims he wanted to fight him handicapped, as he was confident he was the more powerful one.

The Restrictor called forth Azul the Cerulean and Rosso the Crimson and told Weiss that if he wanted to fight handicapped, he could: against Azul and Rosso. Weiss beat them both easily, but Azul transformed into Arch Azul and Rosso into Bloodburst Rosso. Still, Weiss proved to be more than a match for the two Tsviets. Unable to attack the Restrictor, Weiss ordered the player to shoot him.

The player defeated the Restrictor who forced his gunblade into the player's stomach and watched as they dropped to the floor. Weiss took the opportunity to execute the Restrictor, knowing that along with the Restrictor's death came the release of a virus within his body, a defense mechanism designed to deter Weiss from attacking the Restrictors. As the dying Restrictor explained this to Weiss, Weiss retorted that it was he who said that death was always with you as long as you are a part of Deepground, and Weiss and the Tsviets laugh at the Restrictor's demise.

At the time of the Kalm revival festival, the Worldwide Network that was offline since the Meteor disaster was restored. The fragments of Professor Hojo's digitized mind that were previously spread were about to reform. Hojo invaded Weiss's body while he was performing a Synaptic Net Dive to find the cure to the time-released virus the Restrictors infected him with. The virus was meant to control him and ultimately kill him within three days if the Restrictors' signal disappeared.

Hojo, through Weiss, had Deepground abduct those not under the effects of Geostigma to serve as incubators of pure mako, as Hojo needed purity for Weiss to summon and absorb Omega. This granted Weiss superhuman strength, speed and endurance, and he was easily able to overcome his adversary, Vincent Valentine. Vincent turned the tables by embracing Chaos's power, leading to Weiss's initial defeat.

Once Weiss was defeated, Nero, who had been watching, attempted to merge with his brother. Hojo ordered Nero to stop, knowing he would not be able to control Omega with an impure being inside him. Neither Weiss nor Nero cared, and Hojo was destroyed as Nero joined with Weiss. Weiss invoked Omega's power by a sense of compulsion and vanished in a ball of light. Vincent later supposedly defeated Weiss in Chaos's form, but an awakened Genesis carried away his body, telling his "brother" that they "still have much work to do".

As Scarlet released Nero to pursue two intruders within her Advanced Weaponry Division, Nero observed Weiss hooked up on a device. Elsewhere, Professor Hojo's assistant Chadley was analyzing Weiss and making a digital copy of him for the Shinra Combat Simulator.

Weiss is fought as a boss twice at the end of Chapter 11 in Dirge of Cerberus -Final Fantasy VII-. At first he cannot be killed, as it is extremely difficult to hit him and any hits do not affect his health, so the player must lose. He is fought again in a regular battle once Vincent has been augmented by Chaos. Weiss returns fused with the Omega as the game's final boss, Omega Weiss.

Weiss is a secret boss available to fight in the Shinra Combat Simulator. Director and character designed Tetsuya Nomura chose him for this role because he is a powerful enemy outside of Sephiroth.[3] He can be fought in Chapter 17 during hard mode after the player completes Episode INTERmission. He is an especially difficult boss who takes little damage unless staggered and most of his special attacks are unblockable.

In the scene immediately before the Omega Weiss battle, the tense and ominous song "Death and Rebirth" plays, with a female choir and percussion instruments, reminiscent to the leitmotif for the Jaws film series.

He is voiced by Jouji Nakata in the Japanese version. He shares his Japanese voice actor with Grimoire Valentine.

Weiss and Nero restrained artwork for Dirge of Cerberus. 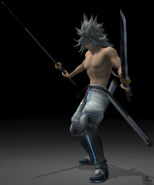 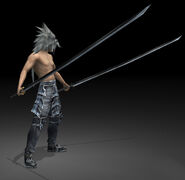 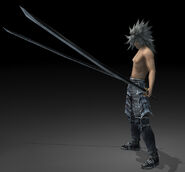 [view · edit · purge]Weiss (spelled "weiß") means "white" in German. This shows the relationship between Weiss and his brother Nero (which is Italian for "black"). His subtitle, Immaculate, refers to pure whiteness and is derived from the Roman Catholic belief of the Immaculate Conception where the Virgin Mary was born untainted by original sin. This meant imperfection and sin were not passed on to the child, similar to how Weiss was created to be untainted from the Lifestream.

In the Japanese version, he is identified as the "Pure White Emperor". [view · edit · purge]The term "emperor" is of Old French origin and was derived from "Imperator", which was the title of the Roman head of state during the Roman Republic and, post-Augustus Caesar, the Roman Empire, and itself roughly means "commander".

An emperor is a (male) monarch, usually the sovereign ruler of an empire or another type of imperial realm. Empress, the female equivalent, may indicate an emperor's wife (empress consort), mother (empress dowager), or a woman who rules in her own right (empress regnant). Emperors are generally recognized to be of a higher honor and rank than kings, and are generally the highest temporal political rank/honor in existence. Unlike other characters who use the archaic form "Kōtei", Weiss uses the term "Teiō".