Wedge is self-described as "roly-poly," enjoying food. He has black hair held back with a red bandana, and wears a beige shirt, blue shorts, brown boots and shoulder pads, with a bandolier across his chest and grenades on the belt of his trousers.

While Wedge appears easygoing and thoughtful, he has self-esteem issues over his weight and ability to contribute in Avalanche. He conceals his worries by acting cheerful around others. He expresses concern for Cloud's emotional well-being, offering to help if Cloud ever needs somebody to talk to while believing Cloud's reasons for helping them are more than just money. He loves Tifa's cooking, attributing his weight to its deliciousness. In Final Fantasy VII Remake Wedge cares for numerous cats. The slum dwellers talk about "someone in the neighborhood watch who is a real cat whisperer," and he once invites Cloud to visit him so he can meet all his cats. Barret later laments that Wedge really looks up to Cloud and wants to be friends with him, but is not good at expressing it with words.

Wedge is also an older brother; if spoken to just before jumping off the train on the way to the Mako Reactor 5 in the original game, he remarks that he looks like his younger brother in the disguise he is wearing.

Wedge jumps off the train with the rest of Avalanche, and takes part in the attack on Midgar's Mako Reactor 1. His job is to secure the exit route while the others go set the explosive. The mission is a success, and Avalanche retreats to the Sector 7 Slums, where their hideout, Seventh Heaven, is located. When they head to their next mission the next day, problems arise concerning their fake IDs at the checkpoint. Wedge warns the party that the train carriages are going to lock down to catch the intruders onboard. He, Biggs and Jessie stay behind in disguise, while Cloud, Barret and Tifa escape into the underground railway system.

When Shinra attacks Sector 7 to drop the plate upon the Midgar Slums, Wedge fights to defend the town and the pillar. He dies when he falls from a support beam and dies content that Cloud remembers his name.

Wedge appears as a spirit in the lifestream in Hoshi o Meguru Otome.

Wedge admires the strength of Cloud Strife, a mercenary Barret has hired for the mission at Tifa's behest, for Cloud is her childhood friend. Though Cloud says he is only working for money, Wedge thinks Cloud does care for Avalanche's cause and its members. He helps Jessie, Biggs, Cloud and Barret on the bombing mission by securing their escape route, and afterward they make their way back to the slums on the train.

Barret decides to not hire Cloud for the next mission though Jessie and Wedge try to convince him otherwise. Cloud stays around the Sector 7 slums a while longer to build up a reputation as a mercenary for hire, and Jessie hires him to take her topside to procure a new blasting agent for the next mission. Suspecting that Jessie is heading topside, Biggs and Wedge tag along, providing two motorbikes for them to ride through the train tunnels. Wedge drives while Biggs is the passenger, firing at the Shinra troops that appear to try and stop them.

At Jessie's mother's house Wedge loves the pizza she serves, and they converse while Cloud sneaks in from the back to steal Jessie's dad's Shinra ID card. They use it to infiltrate a Shinra warehouse, and Cloud, Biggs and Wedge act as a diversion while Jessie goes alone. Wedge helps Cloud and Biggs when more Shinra troops arrives, and is surrounded and saved by another faction of Avalanche that drops him off when they leave. At first the others think Wedge is hurt, but soon find out he is only bruised and is just fine. They parachute down the plate to the slums, Wedge riding with Cloud. Afterward, he shows Cloud around the slums and wants to introduce Cloud to his cats.

The next morning the slums are attacked by invisible ghostly beings and Wedge helps Barret and Jessie defend the bar, but becomes overwhelmed and Jessie is hurt, preventing her from taking part in the next bombing mission. Barret hires Cloud as her replacement and the mission in back on track, and asks a reluctant Wedge with looking after Jessie and Marlene back at the bar. Wedge thinks that Barret doesn't want him on the mission because he doesn't believe in his skills, but Barret assures that because Wedge is not hurt, he is the best one to stay behind to look after the girls.

When Shinra attacks the Sector 7 support pillar Wedge is among the others in defending it. He falls but his grappling gun softens his landing. Aerith and Tifa rush to patch him up. Tifa asks Wedge and Aerith to go get Marlene to somewhere safe while she scales the pillar to go help the others. Wedge leads Aerith into the chaotic slums, but feels like he can't do anything to help the situation and only gets in the way. Aerith encourages him, saying that they always must do their best as not to have any regrets. With newfound courage Wedge leads the scared locals toward Sector 6 when a Shinra Public Security Division soldier opens the gate there. He is hounded by the mysterious ghostly beings again, and is caught in the debris when the plate falls.

Barret, Tifa and Cloud got out in time and return to the ruins of Sector 7 to look for survivors. They rescue an injured Wedge from Shinra experiments that were accidentally released in the incident and take him to Aerith's mother's house to recuperate. Barret, Tifa and Cloud infiltrate the Shinra Building to rescue Aerith, and when Wedge hears of this he liaises with Avalanche HQ and Mayor Domino to send a rescue helicopter to extract them. After assisting the party in the Shinra Building, the Whispers prevent him from escaping during its destruction. The scene fades to black with a sound of glass shattering, suggesting he was thrown out the window.

In the Final Fantasy VII Remake Wedge holds the darts record in Seventh Heaven with eight throws. If the player beats the record, they get a trophy and Wedge later gifts Cloud a 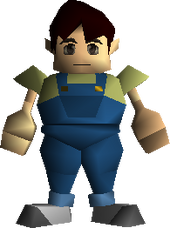 Wedge has a younger brother. During the second bombing mission Wedge wears a disguise in the train, and says he looks just like his little brother. In dummied content from the Honey Bee Inn, a person who is implied to be Wedge's brother, called Kwedge, mentions his elder brother. An NPC in the Wonder Square of the Gold Saucer also uses the same model as disguised Wedge.

When Wedge falls from the pillar and is watched over by Aerith, if the player progresses to the next map where Biggs is, and returns to the previous map, only a little of Wedge is visible, twitching his feet. Due to the gate being blocked by the merchant, it is impossible for the player to talk to him.

During Chapter 8 in the Train Graveyard in Dirge of Cerberus -Final Fantasy VII-, Vincent can talk with a girl from the World Regenesis Organization who says that when her mother died, her brother joined a Shinra resistance group, but was killed when the plate fell onto Sector 7. This could be either Biggs or Wedge.

Wedge appears with a fire-elemental card.