Weather (天候, Tenkou?) is a natural phenomenon in Final Fantasy XIV. Each area is subjected to its own weather patterns, with the weather potentially changing every eight Eorzean hours (23 minutes 20 seconds)—at midnight, 8:00 AM, or 4:00 PM. Most cutscenes in outdoor areas will depict the current weather and time-of-day. In addition to naturally occurring weather, there are several special weather conditions that can only appear in certain areas or under specific circumstances.

The weather in duties are generally constant, however there are certain times that the weather may change, such as when the player reaches the final boss of a dungeon or a boss enters a new phase of the battle.

Weather is mostly a cosmetic phenomenon with no effect on gameplay, though it does have a few exceptions. Some FATEs, S-rank hunts, enemies in public duties such as Eureka, and fish will only appear under specific weather conditions, and several vistas for the Sightseeing Log require specific conditions as well.

Chocobo Racing also features weather effects that can improve the performance of chocobos racing in their preferred weather.

Skywatchers are NPCs found who provide a 24-hour forecast for most public areas. Skywatchers can be found in all major cities and as well as a handful of other locations. Dedicated skywatchers also provide their services to public duties such as

The Forbidden Land, Eureka. Skywatcher forecasts do not include special weather conditions induced by FATEs.

When weather in some regions is disrupted by story events in Shadowbringers and Endwalker, skywatchers are unable to provide forecasts for the affected regions, replacing their forecast with a comment that the current weather conditions are either too obvious or unable to be properly understood, depending on the situation.

Skywatchers can provide forecasts for the following areas:

The folllowing are special weather conditions that only appear in duties or under specific circumstances.

Rainbows are rare phenomina that may occur after a period of precipitation. They can occur when the weather changes at 8:00 AM or 4:00 PM Eorzean time from rain, showers, or thunderstorms to any other condition, though it is not guaranteed one will appear. They appear 10 Eorzean minutes (29⅙ seconds) past the hour and only last 30 Eorzean minutes (1 minute 27½ seconds) before disappearing. Leaving and returning to the area they appeared in will cause them to disappear. 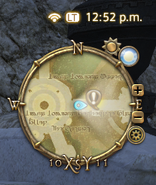 The mini-map showing the current weather.