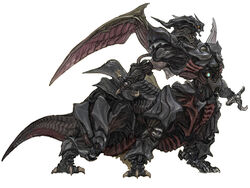 Weapons (ウェポン, Wepon?) are creatures that appear in several of the Final Fantasy games. Monstrously powerful, they are usually some of the toughest bosses in their respective games. Common variants include the Ultima Weapon and the usually more powerful Omega Weapon.

Weapons are generally extremely powerful bio-weapons, created usually by science or magic. For example, in Final Fantasy VI, the Ultima Weapon is an embodiment of powerful magic created during the War of the Magi, while in Final Fantasy VII, Ultimate Weapon is one of the Weapons, a group of colossal, extremely powerful beasts created by the Planet with the purpose of protecting it against great threats to its existence.

The GBA/PSP/iOS remakes include Ultima Weapon as an optional boss. It is a palette swap of a Behemoth sprite and proves to be a difficult boss. It can be found in the Soul of Rebirth dungeon, in an area that consists in a replica of the last floors of the Mysidian Tower. Defeating it grants the player the Ultima spell.

The Weapon's look follows the trend set by the Final Fantasy VI version.

Ultima Weapon appears as an optional superboss in the Depths and it knows some new attacks. After the fight, it drops the Ultima Weapon.

The Ultima Weapon was created as a weapon of mass destruction during the War of the Magi. It is fought on the Floating Continent. There also exists a monster called Ultima Buster that resides in Kefka's Tower.

Ultima Weapon makes its first appearance in the series. Both weapons resemble massive monsters rather than machines.

The Weapons play a vital role in the storyline. There are a total of seven Weapons, most named after a precious stone, except for Ultimate and Omega. The Weapons have a variety of different designs.

Whatever you do, don't call it Atma.

The Omega and Ultima Weapons are random encounters on the Farplane and within Via Infinito. While not as formidable as their former incarnations of the Omega Ruins, they still present a challenge. A stronger version, Paragon, is fought as the penultimate boss of the Via Infinito. Weapons Oversoul after 10 kills.

Ultima and Omega appear as bosses in the Chains of Promathia expansion, classified as Biotechnological Weapons. While Omega is reminiscent of the robot Omega from Final Fantasy V, Ultima looks completely different than any other incarnation, appearing as floating, almost insectoid machine, which appears as if it could combine with Omega to resemble the traditional Ultima Weapon design.

Two other genera of Weapon enemies are exclusive to this title: the Animated Weapon and Evil Weapon. The first is composed by literal animated Weapons, the second is a more mystical genus of enemies.

The Ultima Weapon is the final boss of the original main scenario storyline of A Realm Reborn. It is an ancient anti-primal superweapon that was buried for several centuries before Garlean expeditionary forces under Gaius van Baelsar unearthed it to be used in their campaign against the Grand Companies of Eorzea. Its defeat triggers the ending cinematic and the completion of the main scenario storyline.

During the side events of Final Fantasy XIV: Stormblood, the Warrior of Light has the option to explore the Fractal Continuum (Hard Mode), a dungeon that details the creation of the Ultima Weapon and its prototypes, with the last boss's design based on Final Fantasy VI's Ultima Weapon.

In Final Fantasy XIV: Shadowbringers, Weapons play pivotal role in multiple post-launch scenarios. After the main events of Patch 5.1, Estinien Wyrmblood reveals that during his espionage mission to the Garlean Imperial Palace, he defeated a Garlean prototype weapon by the name of Arch Ultima. In Patch 5.2, Ruby Weapon appears during a Chronicles of a New Era questline, being a Garlean produced weapon using data containing the consciousness of Nael van Darnus. The post-quest cutscenes reveal that Sapphire Weapon is next in line to attack the Eorzean alliance.

Two Magick Weapons named Upsilon are introduced which, like Omega, is a letter of the Greek alphabet. The first is fought near Goug as part of the Heritor quest sequence, and the second subsequently appears in the Aldanna Range during the quest "Wanted: Magick Weapon". After defeating the second Upsilon, the player can read three pub notices, which are "Research Notes", which reveal that the Upsilons were based on the design schematics for the infamous Omega Mark XII.

The unnamed creator was possibly a moogle, since the Upsilons are implied to have been built in Goug. In a possible reference to the game itself, the notes state that the creator called the two later models "Upsilon A2" and "Upsilon A3". While Omega Mark XII was powered by Mist, the three Upsilons were built to utilize lava, snow and seawater, respectively (with a substantial degree of success).

While the second set of notes suggests that the player can fight the third Upsilon, it seems Upsilon A3's intake system was too efficient, as the final set of notes reveals it went wild and exploded due to taking in too much water.

The weapons take their appearance from Final Fantasy XII, except for an additional two legs.

A Weapon, simply called Weapon, appears in Season 2. A creature of immense power that stays in dormancy, the Aldore emperor seeks to use its power to drain the energy of Paladia's crystals and inhabitants, turning the world into a barren wasteland where he is the only existence.

Ultima Weapon from Final Fantasy VI appears in as an enemy.