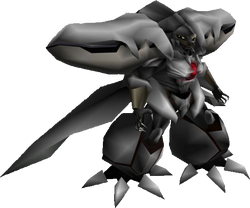 Weapon. Monsters created by the Planet. It appears when the Planet is in danger, reducing everything to nothingness.

Hojo in the PlayStation translation of Final Fantasy VII

The Weapons, also known as the WEAPON, are powerful monsters in the world of Final Fantasy VII. Created to defeat Jenova, the Weapons are massive bio-mechanical engines of destruction designed to protect the Planet. Five Weapons feature in Final Fantasy VII, and two more are introduced in its extended universe. They exist as powerful bosses, and several of them as superbosses.

Each Weapon bears a unique appearance, and a few appear to have elemental attributes. The Weapons are tall and massively powerful, with HP numbering in the six and seven digits for most of them. They are reminiscent of the giant monsters that appear in Japanese Kaiju films, such as Godzilla.

The Weapons were created 2000 years ago when Jenova fell on the Planet. The Planet autonomously spawned the Weapons to fight Jenova, but they ended up not being needed as the Cetra sealed her away. With the threat to the Planet contained, the Weapons crystallized in mako at the North Crater, awaiting the day when the Planet would be endangered and they would be needed to protect it again.

In Crisis Core -Final Fantasy VII- The Banora mining site was closed when Shinra Electric Power Company discovered the Emerald Weapon in stasis. The village was built to hide the discovery with Shinra staffing it with residents.[1] In Final Fantasy VII, Sephiroth acquires the Black Materia and uses it to summon Meteor. Sensing the impending threat, five of the Weapons awake and break free from their mako cocoons.

Due to the energy barrier Sephiroth erects over the North Crater, the Weapons cannot sense his presence and do not target him. Instead, the Weapons go on a rampage. Their main targets are Junon and Midgar, Shinra's bases of operations and the largest consumers of mako energy, and thus perhaps the greatest threats to the Planet the Weapons could detect. Between the combined forces of Cloud Strife's party and Shinra, the Weapons are destroyed.

Sapphire Weapon attacks Junon approximately one week after the Weapons awoke. Sapphire Weapon is aquatic with a long serpentine tail and a streamlined blue and purple body with fins. It has two arms, but no visible feet, indicating it cannot move on land.

Emerging from the water and charging towards Junon, it is immune to the Shinra military weaponry until it takes a point-blank blast from the mako cannon. The cannon obliterates its head, leaving Sapphire Weapon's remains to sink into the water leaving a crater on the ocean floor.

Ultimate Weapon emerges from the North Crater along with the other Weapons and disappears into the sky. It attacks Mideel, and the subsequent earthquake destroys the town. Ultimate Weapon is draconic with four legs, two arms, wings, and a long tail and neck. It is black and purple.

Cid Highwind and his allies fight it when it emerges at Mideel, but it escapes. After Diamond Weapon is destroyed, Ultimate Weapon reemerges above the newly-formed crater near Junon. After defeating it here, Ultimate Weapon flies over the world, stopping at one of several predetermined locations after Cid rams it enough times with the Highwind. After being fought at various places, it is destroyed near Cosmo Canyon and leaves a crater the party can use to access the Ancient Forest.

Diamond Weapon appears when Shinra moves the mako cannon from Junon to Midgar, and emerges from the waters to the north and marches against the city. Diamond Weapon is roughly humanoid in appearance, with a distinct pair of feet, hands, shoulders, and a torso and head. It has a covering over the back of its legs similar to a cloak or cape.

Diamond Weapon wasn't a fightable boss in the original Japanese game version. Yuffie's weapon, Rising Sun, which can be stolen from Diamond Weapon, existed in the game data, but could never be obtained. 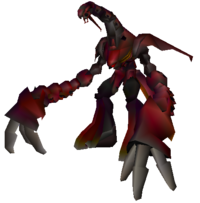 Ruby Weapon can be seen in the FMV sequence emerging from the North Crater, but otherwise plays no role in the story. Ruby Weapon is, like Diamond Weapon, vaguely humanoid with arms, legs, a torso and head, but its limbs are elongated and misshapen beyond human proportions.

Ruby Weapon appears in the desert around the Gold Saucer after Ultimate Weapon is defeated. It appears at first as an indistinguishable red fin moving under the sand, but once approached it erupts and attacks. Fighting it is optional.

Ruby Weapon, as well as Emerald Weapon, did not exist in the original Japanese version of Final Fantasy VII, being added to the North American and subsequent releases, and thus the FMV showing the Weapons emerging from the crater was slightly altered to include the two.

Emerald Weapon can be seen in the FMV sequence where it emerges from the North Crater, but otherwise plays no role in the story. It has a visible head and two shoulder-like appendages, as well as what could be seen as a mouth. Otherwise, its body has two large leg-like extensions but without feet, and two large fins extending from its back.

Emerald Weapon appears in the Bottom of the Sea between Costa del Sol and Junon, and can be found as soon as the player acquires the submarine. It moves slowly and the player can outrun it easily, but approaching it initiates a battle. Fighting it is optional. 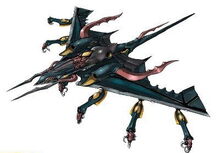 In Before Crisis -Final Fantasy VII-, the Jade Weapon is insectoid in appearance, with a green/blue/purple pair of wings with multiple short legs and a pair of antennae. Awakened by the Turks' destruction of Zirconiade, Jade Weapon begins to hunt down the Turks involved in Zirconiade's destruction. As Before Crisis -Final Fantasy VII- was a mobile phone game, Jade Weapon would appear depending on where the player was in the real world. It could appear over Midgar, Cosmo Canyon, Icicle Inn, Junon, Costa del Sol, or Wutai.

In Dirge of Cerberus -Final Fantasy VII-, the seventh and final Weapon, Omega, appears. Unlike the other Weapons built for protecting Gaia against Jenova, Omega is meant to be its last resort; it appears when the Planet is in dire danger of being destroyed to collect its lifestream and leave into space, transplanting the lifestream to a new planet and leaving the old one a dying husk.

Omega is forced to appear by Deepground and Weiss, under the control of Professor Hojo. Deepground rounds up and kills many people, tricking Omega into thinking the Planet is in danger. Using the Protomateria, Weiss taps into Omega's powers, but Vincent Valentine summons the power of Omega's messenger, Chaos, and defeats Weiss. Hojo's influence over Weiss is broken when his brother Nero merges with him. Omega has still been called, and Vincent must destroy it to save the Planet.

In Final Fantasy VII Chaos appears as Vincent's fourth, and most powerful, Limit Break. In Dirge of Cerberus, it is revealed Chaos is a semi-Weapon that serves as Omega's messenger.

A frozen Emerald Weapon appears as an Easter egg buried in Banora Underground. In the northern sections of the first area "Depths of Judgment", Emerald Weapon's shoulders emerge from a formation of crystal. The ridges and slots on the shoulders identify it, but the player is unable to move Zack or the camera as to see past the crystal.

Emerald Weapon lies beyond the map borders, and the player cannot get closer to it. The same Emerald Weapon sighting might be encountered on background in mission 9-6-6, during the battle with superboss Minerva.

The Ultima Weapon appears as an ancient Allagan warmachina, unearthed by the Garlean Empire who in turn turn it on Eorzea in an attempt to subjugate the realm, serving as the final boss of A Realm Reborn. The Ruby, Sapphire, Emerald and Diamond Weapons appear in Final Fantasy XIV: Shadowbringers, having been reverse-engineered from the Ultima Weapon by the Garleans.

Ultimate Weapon appears as a superboss under the name "Ultima Weapon". 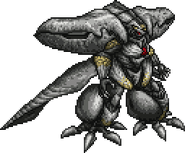 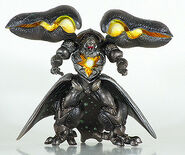 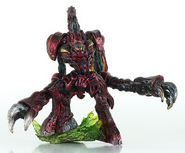 In the original English translations of Final Fantasy VII, "Weapon" is treated as an invariant noun, similar to "SOLDIER".

Despite the Crisis Core Complete Guide stating Shinra had discovered Emerald Weapon in Banora and subsequently sealed the cavern,[1] in Final Fantasy VII Professor Hojo believes the Weapons are but legend until arriving at the Northern Crater stating: "Weapon... Then it really does exist... I didn't believe in it."