Guest character
Watts is a temporary party member in Final Fantasy Adventure. He joins up with Sumo in a mine, and from then on sells him various items. If the proper quest is completed, Watts can forge the silver equipment (in the Japanese version, the equipment made by Watts and the dwarves is forged from mythril, not silver).

Watts is a dwarf who lives in Dwarf Cave likes the mines in Old Mine looking for some silver. After Sumo's misadventure within the mine, he wakes up near Watts and when he learns the Sumo is looking for silver too. He joins him in his search.

At the bottom of the mine, Sumo and Watts comes across the Megapede. Upon its defeat, they claim the silver. Outside the mine, Watts tells Sumo that he'll take it back home and forge armor and swords from the silver.

Sumo return to the Dwarf Cave after venturing through the mine, and finds out the Watts has finish making items out of the silver they found. He'll sell them to him and mentions that he'll be able to pass through Gaia when he's equipped with these.

After Julius's Defeat, Sumo visit Watts inside the mine.

As a Dwarf, Watts wields the Throwing Axe as his weapon of choice during battle. If asked, he will let the player buy items from his shop.

Despite dwarves appearing in the series since the original, Watts is the first Dwarf to join a player party. Watts resembles the Viking job class introduced in Final Fantasy III. 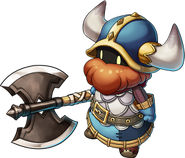 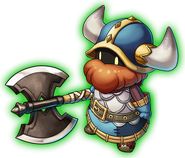 Mythril Watts.
Add a photo to this gallery 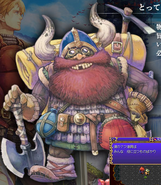 Artwork from the mobile remake.
Add a photo to this gallery