(滝の裏の洞窟, Taki no Ura no Dōkutsu?, lit. cave behind the waterfall)

The Waterfall Cavern, also known as Waterfall, is a location from the original Final Fantasy. As the title reveals, its entrance is through a waterfall west of Onrac. The area is only comprised of one floor, but it is built similar to a maze as there are multiple dead ends. The Waterfall Cavern holds many rare treasures, including one of the three Ribbons in the game.

It is generally considered one of the game's easier dungeons; only the Cockatrices and Pyrolisks pose any threat, and by this point the Light Warriors will have a number of tools to deal with them.

The Warriors of Light find a robot here, which gives them the Warp Cube. The robot powers off and ceases to respond, and it is not until the party's journey through the Mirage Tower that they encounter more automatons and learn of their creation by the Lufenians.

The background music that plays inside the Waterfall Cavern is "Matoya's Cave". 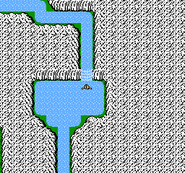 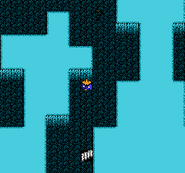