(闇の戦士, Yami no Senshi?)
Alternate names: The Heroes of the First (第一世界の英雄たち, Daiichi Sekai no Eiyū-tachi?)

Mark well our faces, Warrior of Light, for we are the Warriors of Darkness. Walkers of a different path. And we shall meet again.

The Warriors of Darkness are a group of five antagonists from Final Fantasy XIV, residents of the First who share the physical appearances of the adventurers in the game's cinematic cutscenes with their gear dyed black. The Hume Ardbert, a counterpart of the Warrior of Light, acts as the group's leader and representative, appearing alongside Elidibus in several scenes.

In the Final Fantasy XIV: Shadowbringers expansion, the Warrior of Light takes up the mantle of a Warrior of Darkness to restore balance to the First.

A sixth forgotten member, Cylva, also traveled with them.

The bodies of the Warriors of Darkness, Ardbert and Cylva excluded, have since then become Cardinal Virtues, powerful sin eaters who roam the land of Norvrandt and are subconsciously driven by their old desires. Their appearances are relatively the same, with the exception of their skin being a plaster-like white, black and red eyes and a ghastly white glow around their bodies.

Originally from the First, the Warriors of Darkness are adventurers who became their realm's Warriors of Light and fought the Ascians. From humble beginnings, Ardbert traveled the world in search of adventure and found comrades in Lamitt, a Dwarf healer; Branden, a disgraced knight; Nyelbert, a mage in search of great power; and Renda-Rae, an exceptionally skilled hunter of notorious marks. Their battles brought them knowledge of a hidden mastermind behind the realm's woes, named the Shadowkeeper.

The warriors were accompanied by an elf swordswoman named Cylva who unbeknownst to them, had her own dark agenda. She eventually revealed herself as the Shadowkeeper, who by instructions of the Ascians Mithron and Loghrif, tempered Ardbert and his companions into becoming the Warriors of Light and obtaining their crystals so that they could push the First to the brink of destruction and bring about the Umbral Calamity by killing her.

Ardbert refused as Cylva was still a dear friend to them. They turned their weapons on the Ascians responsible, Mitron and Loghrif, killing the latter but unknowingly played into the Ascians' hands and ended up dooming their world by transforming the former into the first sin eater later known as Eden. Ardbert's sincere wish for the Light to prevail against the Darkness caused Eden to unleash Flood of Light. Renouncing their physical forms by placing their bodies in crypts in Eulmore and assuming that Hydaelyn had forsaken them, the Warriors of Darkness allied with the Ascians in the hope that they could restore their world.

In response to the Warrior of Light's actions destroying the Ascians Nabriales, Igeyorhm and Lahabrea, Elidibus—the Ascians' Emissary—summons the Warriors of Darkness as a counterbalance by having them terrorize the beastmen tribes on the Source so they can summon stronger primals. The Warriors make themselves known in the Smoldering Wastes at Lost ast Gnath, defeating Ravana before attacking the Scions of the Seventh Dawn. Ardbert is about to attack the Warrior of Light when Thancred Waters intervenes, forcing the Warriors of Darkness to fall back.

In the aftermath of the Dragonsong War's conclusion, the Warriors of Darkness retrieved the Eyes of Nidhogg from the ravine beneath the Steps of Faith for Elidibus, who later gifted them to Ilberd Feare hoping his actions could produce a Calamity.

When the Warrior of Light intervenes in the summoning of Garuda at Xelphatol, his group is accompanied by a disguised Urianger Augurelt. Ardbert reveals his origins to the hero and Alphinaud Leveilleur before they take their leave. Urianger later tells Ardbert that the "man in white" wishes him and his group to continue in their work. Ardbert becomes angry with this response, so Urianger suggests that they could instead kill the Warrior of Light to bring chaos to the Source. Arbert then instructs Urianger to lure the Warrior of Light out. The Warriors of Darkness wait for the Warrior of Light's arrival while terrorizing the Amalj'aa, the group fighting the Scions before restraining them.

Urianger comes to the Scions' aid as the Warrior of Light and Alisaie Leveilleur use an aetherial blade to defeat their enemies. When the Warriors of Darkness refuse to surrender and reveal their old Crystals of Light, the Warrior of Light acts at Urianger's behest, using their crystal to bring them to Hydaelyn's realm. Though Ardbert initially attempts to strike down Minfilia when Hydaelyn offers her to the First, he ultimately accepts Hydaelyn's offer. Returning to their world as the Flood of Light is about to consume Norvrandt, the Warriors of Darkness, save Ardbert, sacrifice themselves to give Minfilia the power to still the Flood.

A century later, due to the time-difference between the two realities (time passes faster in the First), Ardbert is reunited with the Warrior of Light who is the only one who can see him. During the final battle against Emet-Selch, Ardbert, revealed to be the Warrior's First Star counterpart, merges with the Warrior of Light to help them stabilize the light they amassed from defeating the Sin Eaters.

In the final job quest of the Dark Knight class, "Our Compromise," Myste creates simulacrums of the Warriors of Darkness alongside the Heavens' Ward from the Warrior of Light's darkest memories to fight them and Fray. Digging deeper into the Warrior's memories, the last two he summons are Ardbert and Ser Zephirin. In the end, they are destroyed.

As shown in the Role Quests in Shadowbringers, the corpses of Ardbert's companions were possessed by the corrupting light of Vauthry's power, becoming feared as exceptionally powerful Sin Eaters, Cardinal Virtues. They haunt the land of Norvrandt driven by instinct and repeat actions that initially drove their innermost desires in their past life. The Warrior of Light/Darkness can join forces with sinners to hunt down the Virtues and give them rest.

After hunting down all of the Cardinal Virtues, Cylva regales the adventurers' tales to the Warrior of Light while revealing that she had set up the hunt for the Virtues, hoping that the promise of adventure might attract the attention of someone like Ardbert while wanting to avenge the tarnished memory of her friends by Vauthry's hand. She takes the Warrior of Light on a trip across Norvrandt while alluding to the presence of herself as the sixth companion and the role she played. The tale ends at Lakeland where she revealed herself to the adventurers. She begs the Warrior of Light to end her life so that the final villain may at last be punished. The Warrior refuses as she is still a good person who cares for her friends, and urges her to live on so that the legend of the Warriors of Light do not fade from history. Convinced of her newfound purpose, she hangs up the armor and returns to the Crystarium to live on as Cyella to ensure their stories live on.

The Warriors of Darkness are fought during the quest

One Life for One World in a special instance duty. They revive themselves using the Echo, and as such can only be defeated by charging up Alisaie's aetheric blade enough to strike them down before the Magus of Darkness can finish them off with powerful magic.

In Shadowbringers, each of the Warriors is made temporarily playable at some point in each of the corresponding Role Quests through Echo visions before having a final battle with their Virtue counterparts at the end. At least one questline is required to continue the Main Quest Scenario, as completion bequeaths their broken Crystal, needed to continue while also unlocking the weathered relic gear sets for jobs that have reached Lv. 80.

While the Warriors of Darkness have their gear dyed black, their palettes are unique to them and cannot be replicated with available dyes. 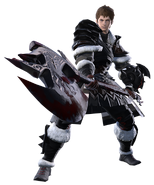 The Warriors of Darkness.

Warriors of Darkness against the Scions.