The player character is an adventurer in Eorzea during the Seventh Umbral Era who joins one of the three Grand Companies and becomes a key member of the Scions of the Seventh Dawn. The Warrior of Light can be one of the eight major races of Eorzea: Hyur, Miqo'te, Roegadyn, Lalafell, Elezen, Au Ra, Viera, or Hrothgar.

In the CG cutscenes and most of the game's trailers, a young male Midlander Hyur represents the Warrior of Light, appearing as an Archer in the opening of the original game, as a Warrior in the "End of an Era" cutscene and A Realm Reborn trailers, as a Dragoon in the opening of Heavensward, as both a Monk and Samurai in opening of Stormblood, and as a Dark Knight in the trailer of Shadowbringers.

In addition to the main character, the phrase "Warriors of Light" is also used to describe adventurers who fought in the Battle of Carteneau and disappeared during Bahamut's rampage thanks to Louisoix Leveilleur's magic.

The life of an adventurer is the pursuit of fortune and fame and devoting oneself to seeking out danger and glory. It is an endless quest taken up by the most intrepid and dauntless of souls.

The term came into popular use among Eorzeans little more than a decade ago. Left idle by the onset of the Age of Calm, a leading mercenary officer gathered a number of trusted companions to form a guild dedicated to the common cause of aiding the realm. Outside the modest station of their humble beginnings, a simple sign hung for all to see―Adventurers' Guild.

The Adventurers' Guild has since spread, and is now found in each of the realm's great nations. Eorzeans come with their myriad pleas and requests and adventurers heed the call, whether it be slaying of foul beast plaguing the countryside, or the crafting of wares demanding a master's touch.

While the adventurer's personality is crafted by the player's preference, they are initially depicted in cutscenes as stoic and silent, often responding to others with a nod. They are always willing to help those in need.

Following the events leading up to Heavensward, the adventurer's emotions become more pronounced and the player is given more freedom over their character through multiple-choice responses, though there are rare instances where the adventurer's emotions become more expressed independent of player input. At one point, the adventurer becomes enraged to the point of wanting to strike Emmanellain de Fortemps for his panicked attempt to shift blame after an order to strike down a coup's leader, and it is a running joke at various points of Heavensward that the adventurer is leery of drinks offered to them due to the events of Nanamo Ul Namo's botched assassination. The Warrior of Light regrets Haurchefant's death, but continues to honor his memory. When they reunite with the Scions, Papalymo Totolymo remarks that they seem more world-weary and rugged.

During the final events of Stormblood, the Warrior of Light controls their emotions and anger. Even in the face of Asahi's insults and hate-filled words, the Warrior does not take the bait, knowing of the political conditions. In Yotsuyu's final moments, the Warrior offers comfort and condolences despite the crimes she had committed to her people.

The Dark Knight job questline delves into the adventurer's psyche. Fray is a manifestation of resentment and bottled up anger at being viewed as a weapon or errand-boy, with the journal entries for the questline referring to an admiration of Fray for voicing the adventurer's own frustrations without worrying about the consequences. This is the adventurer lashing out against their will or "speaking without thinking", as Fray is their dark side fighting for supremacy and is likely not actually visible to anyone else. Fray is also a manifestation of the adventurer's desire for a tutor in the dark arts, as they have no satisfactory starting point for learning to become a Dark Knight beyond the provided Soul Crystal and must teach themselves.

Later, their sorrow manifests as Myste, a boy resembling Ysayle Dangoulain and Haurchefant Greystone, as a representation of the lives the adventurer has taken simply because they or their allies were opposed, and for being unable to save those close to them. With Myste, however, it's much more ambiguous as to whether his motivations align with the adventurer's on any level, as he routinely makes poor decisions in his choices of who to offer post-mortem comfort to among the living, and permission is given to use the aether of the adventurer's Dark Knight soul crystal only grudgingly to begin with.

In Shadowbringers, the Warrior of Light (after taking the mantle of Warrior of Darkness) is angered and sad over the suffering the denizens of the First face. They reunite with their counterpart and former foe, Ardbert, and provide each other advice during the struggle against the sin eaters. The Warrior becomes the catalyst in Arbert regaining his sense of hope, and together they are able to defeat Emet-Selch. The Warrior of Light shows the capacity of sympathy, or at least pity, for their foes, after defeating Vauthry and Solus.

It is also shown that the Warrior is attuned to the personalities of their friends. For example, the Warrior very well knew not to provoke the temper of Alisae and tried to warn Alphinaud not to laugh when she made a clay piece.

Depending on whether the player has played the original version and therefore transferred the data to the relaunch version A Realm Reborn, the Warrior of Light may be one of the original adventurers who disappeared five years ago at the Battle of Carteneau due to Louisoix's spell, suddenly reappearing in the world. If starting from A Realm Reborn, the Warrior of Light is a new adventurer journeying to one of the 3 starting city-states of Eorzea in order to persue the adventuring life.

The Warrior of Light joins the Scions of the Seventh Dawn after being scouted out in whichever region the player started out in. Their joining marks the Scions' turning-point as an effective organization thanks to the Warrior's ability as a possessor of the Echo to reliably come in contact with primals without fear of enslavement, and their fighting prowess along with Hydaelyn's blessing.

The role of the Warrior of Light beyond the main story is mostly decided by the player's activities and choices made. Progress in certain jobs or tradecraft disciplines has a measure of change on dialogue, such as Estinien Wyrmblood acknowledging the Warrior's status as a second Azure Dragoon in Heavensward.

The ending of Shadowbringers suggests the Warrior of Light may be a reincarnated Amaurotine who did not escape the sundering of the world when Hydaelyn bested Zodiark. It is later revealed that they are the current incarnation of the fourteenth member of the Convocation, Azem, also known as Shepherd to the Stars. Azem was a member of the Convocation who left Amaurot to see the world and learn of its people, unlike the other members. According to Hythlodaeus, if trouble arose during Azem's travels, he/she would not return home to ask for help, but would seek their comrades and confront the issue directly as was their wont. If asked, Urianger speculates Azem may have been related to the goddess Azeyma and the Au Ra Dawn Father, Azim, due to a similarity in names and mythic connection to the sun/light. Azem's power and memories of them were preserved by a friend in a crystal that the Warrior of Light obtains later in Amaurot during the events of patch 5.3, Reflections in Crystal. This "friend" is later shown to have been Emet-Selch, given implied later involvement in a critical encounter with Elidibus as the original Warrior of Light.

The following article is based on a subject that has not been officially named in any official Square Enix material; the current title is merely a placeholder.

Akihiko Yoshida
This Midlander Hyur who acts as a poster boy for Final Fantasy XIV represents the player when the player's model can't be used, such as in pre-rendered CGI cutscenes and trailers. He first appeared in promotional images and the game's original opening movie, and has since appeared in the "End of an Era/A New Beginning" videos and related promotional media for A Realm Reborn and the following expansion.

Officially is known as Meteor Survivor, a name used in the recordings of the event sequences from 1.0 on the Realm Reborn Collector's Edition lore compilation disc. Many fans refer to him as the "CG Midlander", or simply as "Hyur Midlander" (first name Hyur, last name Midlander). He is often shown alongside other characters, including a Sea Wolf Roegadyn, a Wildwood Elezen, a Seeker of the Sun Miqo'te, and a plainsfolk Lalafell, though he is consistently the main focus. These companions do not appear in the expansion opening movies.

As of Patch 3.1, "As Goes Light, So Goes Darkness," characters almost identical to the Hyur Midlander and his companions appear, this time as antagonists titled the Warriors of Darkness. The characters go by aliases in their initial appearances before their real names are revealed in Final Fantasy XIV: Shadowbringers, with the Male Hyur Midlander being named Arbert/Ardbert, and the rest are named Blanhaerz/Branden (Male Sea Wolf Roegadyn Paladin), J'rhoomale/Renda-Rae (Female Seeker of the Sun Miqo'te Archer), Naillebert/Nyelbert (Male Duskwright Elezen Black Mage) and Lamimi/Lamitt (Female Plainsfolk Lalafell White Mage). Ardbert shares the same voice actor as the posterboy from the 1.0 trailer.

During the 2019 edition of The Rising event, illusions of the player character appeared alongside Naoki Yoshida, dressing in costumes the Meteor Survivor wore in promotional arts; Archer from the original version, Warrior from A Realm Reborn, Dragoon from Heavensward, Monk and Samurai from Stormblood, and Dark Knight from Shadowbringers.

The chosen gender for the Warrior affects Azem and Fray's manifestation. In Dissidia Final Fantasy Opera Omnia, the Warrior of Light is mentioned by some of the Final Fantasy XIV characters, thought without specifying gender.

According to Hancock Fitzgerald, one of the stranger epitaphs given to the Warrior of Light in Stormblood is the Stealer of Pants. Though this is in reference to the Heavensward Hildebrand missions, Hancock claims this is more of a rumor. 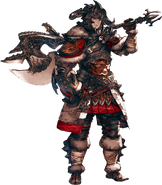 Warrior of Light in The Far Edge of Fate artwork.

Featured in the key visual of Stormblood as a Monk in the middle right.

Artwork as a Samurai.

As a Samurai in Akihiko Yoshida's artwork.

As a Dark Knight in Shadowbringers artwork.
Add a photo to this gallery

As an Archer in the Legacy opening.

Witnessing the fall of Dalamud.

As a Warrior in the End of an Era.

As a Warrior in A Realm Reborn.

As a Dragoon in Heavensward opening.

As a Monk in Stormblood opening.

With Lyse in Stormblood opening.

As a Samurai in Stormblood opening.
Add a photo to this gallery

Full to-scale replica of the Warrior of Light's armor.

Another replica of the Warrior of Light's armor.
Add a photo to this gallery