The Warrior of Light appears as a legendary (5-stars) Triple Triad card.

A high level armor set based on the Amano artwork of the Warrior is available to the two tank classes, Gladiators/Paladins and Marauders/Warriors. Most of the armor are rewards from the Labyrinth of the Ancients, in the Crystal Tower. The Helm of Light, however, is a part of the collector's edition and is only level 1.

A Wind-up Warrior of Light Minion, based on the Amano appearance, and Barding of Light, for player's chocobos are the Rank 6 Veteran Rewards (360 days subscription time).

With crystal in hand, the Warrior of Light appeared to the world when it is cloaked in a darkness long foretold of in legend. The Warrior of Light has no memory of a life before his coming to the land and no knowledge of from whence he came. Yet he shall overcome both time and space to pursue Garland and restore the light to the crystals of the world, robbed so long of their power.

The Warrior of Light is one of 13 default playable characters. His outfit is that of his original Yoshitaka Amano art and Knight EX Mode in the Dissidia series.

The Warrior has a good balance in both offense and defense, and his abilities enable him to perform well in both field and battle stages. He is primarily defensive, as his offense is outclassed by other characters that can deal with boss-type enemies. Regardless, he is a recommended character for beginners thanks to his useful Defense abilities.

Warrior of Light is a default playable character. If the player did not select him in their party of four, he can later be unlocked by collecting Red Shards.

The Warrior has several new abilities to further strengthen his already solid offense and defense, though loses abilities that assisted him in Field Music Sequences. He is outclassed by other characters that are better suited in either stages, but remains a solid choice for beginner friendly players thanks to his defensive forte.

The Warrior is one of 28 default playable characters.

His limit, Oversoul, deals damage to boss-type enemies in direct proportion to Strength.

The Warrior of Light appears as a playable character.

The Warrior of Light appears as a Legend character in his Yoshitaka Amano design.

The Warrior of Light appears as a recruitable character, unlocked in Cavern of Earth 1 on Classic in the storyline of the original Final Fantasy as the First Time Reward. He had also appeared in the Challenge Event Relics of Light, where he was obtainable as a Mastery Reward upon completion of the Cavern of Earth 1 battle. He was further available in the Mobius Final Fantasy Collector's Event Doorway to Another Realm along with his "namesake" in Wol. 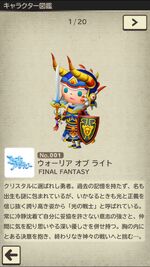 The Warrior of Light appears as a summonable vision and optional playable character. A 4-6★ Rare Summon, his job is listed as Warrior of Light, and his roles are Tanking and Support. He originally could awaken only up to 5★, but received a new form around the release of Shadow of the Empire. His Trust Master reward is the Light's Blessing passive ability.

The Warrior of Light's attire appears as a costume for Wol. 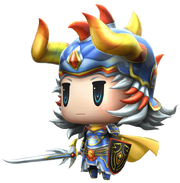 The Warrior of Light appears as a denizen of Grymoire. When introduced, he appears before the protagonists Lann and Reynn as the Brigade Captain of Cornelia. He informs the two of their plan to stop the enemy invasion in the Watchplains.

When Princess Sarah is about to be attacked by the Giant Goblin, the Captain steps in to save her, but the Goblin retaliates, prompting the twins' light to indirectly awaken the Captain's ability as a Champion. He fells the Goblin, and is dubbed by the Princess as the "Warrior of Light".

Returning to the castle with the Princess, he informs the twins of the "League of S", an anti-federation group rebelling against the Bahumutian army. The Warrior volunteers to contact them in Saronia, but Lann and Reynn go in his place instead, so that the Warrior can continue protecting Princess Sarah and Cornelia.

Who's Who
Warrior of Light
CV: Grant George / Toshihiko Seki

From medium to Champion
This legendary hero fights for truth, justice, and the Cornelian way.

When we first met the Warrior of Light, he was just another brigade captain in Cornelia's royal army. However, after being touched by the twins' mysterious light, he awakened as a Champion.

Where Are the Other Warriors?
In Grymoire, it was a nameless soldier who awakened as the Warrior of Light.

But the Warriors of Light take many forms in many worlds. Perhaps you know of a few yourself. And perhaps those other Warriors may set foot in Grymoire one day, if they have not already.

Soul Searching
Grymoire's creator has marked certain people with unique and powerful souls as Mediums. Each Medium is a candidate with the potential to awaken as one of Grymoire's greatest defenders, the Champions.

These souls are chosen from many worlds and copied over to an "A-World" like Grymoire in order to potentially become its Champion. But for the system to work, their lives must be reconstructed and adapted to the target world without changing the elements of their souls that made them so valuable in the first place.

Interestingly, though, they often go on to lead lives similar to those of their originals. They are not supposed to remember who or what they once were... But over innumerable years and innumerable lives, some of these recreated souls seem to retain hazy memories of lives past. The Warrior of Light is one such special case, but in Grymoire, he is not the only one.

First Worlds of Origin:
FINAL FANTASY: As one of four heroes
DISSIDIA -FINAL FANTASY-: As a distinct character

The following is a list of quotes uttered by the Warrior of Light when talking to him.

All is quiet for the moment.

Don't worry about us. I'll take care of things here.

The other day I made the foolish decision of going to check on the goblins...
But...I would prefer not to talk about it.

There are trading cards that depict the Warrior of Light.

The Warrior of Light appears as an opponent and on Triple Triad cards in the version available via the Final Fantasy Portal App. On Easy he uses no special rules. On Normal he uses the rule Swap. On Hard he uses Same and Swap and the rare five star cards of himself and of Sarah from Mobius Final Fantasy can be won from him, among others. He uses the trade rule One.

The Warrior of Light appears as a minor non-playable character on the world map, named "Slayer".

A costume of the Warrior of Light in his EX Mode in Dissidia Final Fantasy attire appears in Kingdom Hearts Mobile. 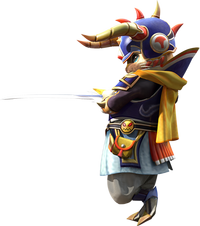 As part of a collaboration between Capcom and Square Enix, Tetsuya Nomura was asked to design various new armor types for the playable characters, and their feline companions.

For Palico Support Nomura created the Purrity Palico Armor set, which is based on the Warrior of Light.

Warrior Of Light appears as part of the 2018 Final Fantasy collaboration.