Edit
watch 00:53
Who is the Warrior of Light?
Do you like this video?
Play Sound

The Warrior of Light was created by Cid of the Lufaine, during the war between Cosmos and Chaos in World B. Cid wished to experiment on manikins to see if one could be imbued with sentience by infusing it with his own memories. After several failed attempts he succeeded; the manikin he created did not have its body crystalize like the others, but he saw no will in its eyes and attributed this to an incomplete memory infusion. To see how his creation fared, Cid placed it in World B for the summoned warriors to find.

The Warrior was found by Prishe and Garland, the latter of whom recognized the warrior. The two fought over him and Prishe prevailed, and took the Warrior to Cosmos where he was anointed as one of her champions. Over several cycles of battle, the Warrior developed his own will and personality, and became a stalwart defender of Cosmos.

When Cosmos and Chaos were destroyed, Cosmos' champions appeared in a field outside of Cornelia in World A, and while nine of them soon faded away to return to their own worlds, the Warrior remained and set off to Castle Cornelia in the distance.

The Warrior became one of four heroes that were known as the "Warriors of Light". They were tasked to rescue the Princess of Cornelia, Sarah, from the clutches of Garland in the Chaos Shrine; this was a past incarnation of the Garland the Warrior had fought in World B. Upon his death, the Four Fiends sent Garland into the past, and it was at this time that he was pulled into World B by Cid at the start of the cycles of war to become a confidante and champion to Chaos.

The Warrior and his companions set out on a quest to restore light to the four Crystal that governed the land by slaying the that were draining their powers. After their light was restored, they returned to the Chaos Shrine and shone the light of the Crystals onto the Black Crystal Garland had possessed - it shattered, creating a portal through time. The four stepped through and found themselves 2000 years in the past.

Here the four found Garland, who - due to the nature of how time worked in World B - was the Garland that had been defeated in World B and faded away at the end of the cycles of war, but neither he nor the Warrior remembered this. Garland explained that after being brought here, he sent the Four Fiends into the future, creating a time loop in which he would live forever. Garland transformed into a demon named Chaos and attacked the Warriors, but was destroyed. With his defeat the time loop was broken and the Warriors returned to a present in which Garland had never abducted Sarah or turned evil, and their deeds in the past had become legends and myths.

When Materia and Spiritus manifested in World B and renewed the cycle of war, they put out a call for warriors from other worlds to fight for them. The Warrior remembered his time with Cosmos and answered Materia's call, feeling duty-bound to serve her as he had Cosmos. This time the summoned warriors put aside their differences to fight against Shinryu, the divine dragon that was attempting to devour World B. Through their combined efforts Shinryu was defeated.

The summoned warriors departed back to their worlds, but in order for Materia and Spiritus to continue their war and generate the needed energy to sustain World B's existence, they left behind their memories of the cycles to be infused into manikins that could fight in their stead, creating a new generation of warriors for the gods.

The Warrior of Light's design is based on Yoshitaka Amano's concept artwork of the Knight class from the original Final Fantasy. He wears pale blue armor with gold, yellow, and white details, a horned helmet, and a yellow cape. He has aquamarine eyes and long, silver hair.

The Warrior of Light is calm, stoic, tactical, and focused, solemnly believing in the light and championing righteousness. Determined and confident in his abilities, he pays no heed to enemies who would attempt to manipulate or dissuade him and continues onward. This unflappable demeanor makes it difficult for his comrades to understand him, but the Warrior is kind and compassionate towards them. He acts as a leader among them, fighting in their stead when they cannot as a matter of honor, and trusting them to keep to their own paths as long as he is assured they are capable of success.

The Warrior is an extremely capable swordsman, and uses both his sword and shield to fight. The Warrior's fighting style is primarily defensive, using his shield and barriers of energy to block attacks and then emit fields of light to strike enemies, or throwing his shield towards enemies to stun them before swooping in for a combo attack with his sword. He is able to infuse his sword and shield with holy light to augment his attacks with them, and can generate waves of light and swords made of light energy, and can do so either as an attack in themselves or when using his sword and shield to augment his strikes with them.

In his appearances outside the Dissidia series, the Warrior of Light keeps to these core traits. He is a melee-focused character who attacks with holy energy and is skilled at defending allies by granting them defensive buffs and barriers, and is able to force enemies to focus attacks on him.

The Warrior of Light has appeared in the following games throughout the Final Fantasy series:

The Warrior of Light has made guest appearances in the following non-Final Fantasy games:

The Warrior of Light was an original design for Dissidia based on Yoshitaka Amano's concept art for the Knight class in Final Fantasy and adapted into a new design by Tetsuya Nomura. The ending of Dissidia and Dissidia 012 mirrors the opening of Final Fantasy with a view of Castle Cornelia from across a lake, and the Warrior begins walking towards the castle as the credits roll, implying he went on to become one of the four Warriors of Light of Final Fantasy. Dissidia NT confirmed this with the Warrior saying "[his] quest first began" in Cornelia Field, and he makes explicit reference to rescuing Princess Sarah from Garland at the Chaos Shrine.

Hero of Light Variant Arts action figure includes extra hands, cloth cape with wire, attack effect parts and display stand. The Variant Arts figures display re-designed icons from the series in a form they haven't actually appeared in a game. Though the Hero of Light represents a quintessential Warrior of Light, he mostly resembles the Dissidia incarnation.

In May 2018 Square Enix releases a silver Warrior of Light pendant with a blue gem as part of the Final Fantasy 30th Anniversary campaign. The reverse side of the pendant simply reads "Final Fantasy" with a carving of a crystal. 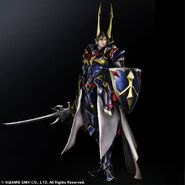 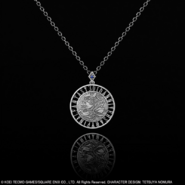