The art of the marauder was first born in the crucible of brutal ship-to-ship skirmishes. Found to be just as--if not more--effective on dry land, this fighting style relies on one's ability to properly direct the force generated by the axe's heavy blade. Thus the techniques employed by a marauder seek to maximize the destructive potential of our chosen weapons. The axe is used to rend, to cleave, and to destroy. It is not our way to simply outfight our adversaries; we seek to overwhelm them. A marauder must be the most powerful and enduring presence on the battlefield; we must account for the most enemies defeated. Our role in combat is that of a steel whirlwind, dealing death and destruction without equal.

The Warrior is a Job in Final Fantasy XIV, introduced as the Discipline of War Marauder (斧術士, Fujutsu Shi?) in the original release. Players start as a Marauder, and then may upgrade to Warrior using the Soul Crystal obtained from the quest Pride and Duty (Will Take You from the Mountain) after Marauder reaches level 30. 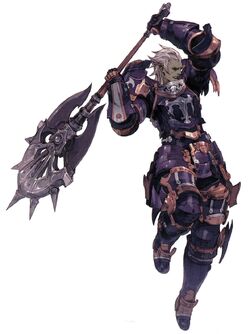 The marauder is a combat specialist who wields the greataxe—a fearsome arm emblematic of Eorzea's pirates. Their approach to battle is one of brute force, relying on strength and steel to crush enemies and sunder weapons.

They are highly sought after for their ferocity and intimidating presence, and are often employed to hunt down monsters plaguing the land, or turning the tide of battle between warring nations. Throwing axes, such as the Francisca, supplement the marauders' arsenal, making them fearsome adversaries even at range.

Marauders attack with an axe and equip heavy armor. Their main role in battle is that of a Tank and many of their attacks have the added effect of increasing the enmity in enemies, forcing them to attack the Marauder instead of other party members.

Marauders generally have the highest HP pool of all classes. They possess abilities capable of restoring their own HP while damaging enemies. As such, Marauders are often seen as a more reactive tank, as opposed to the more proactive Gladiator class. Despite being a tank, Marauders have a high damage per second ratio.

On the northernmost edge of Abalathia's Spine exists a mountain tribe renowned for producing fearsome mercenaries. Wielding greataxes and known as warriors, these men and women learn to harness their inner-beasts and translate that power to unbridled savagery on the battlefield.

In former times which saw war waged ceaselessly in Eorzea, the warriors featured prominently on the frontlines of battle. With the arrival of peacetime their art has descended into the shadows of obscurity, where it remains to this day.

Warrior extends the tanking capabilities of Marauder, as well as massively increasing their capacity for damage and self-healing. In the right circumstances or in late-game, a Warrior will deal burst-damage every bit as effectively as a melee DPS class, though their trade-off of defensive power for increased healing from magic in their tanking stance means they'll need to frequently use defense-increasing cooldown abilities.

Th Marauder of Limsa Lominsa appeared out of both convenience and necessity. Both the lumbering and maintenance of the pirate's ships necessitated the use of dual-handed axes, naturally leading them becoming tools of war during both boarding at sea and disputes on land.

Manipulation of the Waraxe progressively led to the establishment of a school teaching those usages and the Marauders Guild was thus founded. With the Galadion Accord forbidding piracy, the Guild lost its secondary goal of utilitarian teachings to focus exclusively on the martial wielding of the Axe and its member changed to gloryhounds using their strength for the good of the new Lominsan society.

With the fusion of the Knights of the Barracuda and the Maelstrom, the Yellowjackets, the infantry of the former Navy, effectively became independent and established their new headquarter with the Marauders in the Coral Tower. This reflected in their training mainly comprised of Axe wielding and since recently gun shooting.

Marauders and warriors predominantly wield two-handed axes as their weapon. Their armor is primarily made up of "Fending" gear that they share with other tanking disciplines, boasting the highest defenses amongst all armors. At lower levels they also have access to lighter armors used by DPS disciplines. While the bonus attributes of these items may be of use, it is important to weigh their benefits against the defenses lost.

The primary attributes for marauders and warriors are strength and vitality, which boost their attack power and HP respectively, and should always be prioritized over other attributes. As tanking disciplines, they have access to the tank-exclusive tenacity attribute, which boosts their damage done and healing received, while also lowering damage taken.

The Job Gauge was introduced to players in 4.0 Stormblood. The Warrior uses the Beast Gauge.

The Beast Gauge indicates whether or not Warrior is in a defensive stance (Defiance) or offensive stance (Deliverance). When the Warrior is in Defiance, the symbol on the gauge will be a bronze, helmet-shaped design. Defiance increases maximum HP but reduces damage output. The gauge itself will fill with Wrath when the Warrior uses certain weaponskills. Wrath is required to execute actions with devastating power. Advancing the gauge while in Defiance will improve the parry rate.

When the Warrior is in Deliverance, the gauge will be designed with two crossed, blue-gray axes. Damage will be increased instead of HP. As the Warrior gain Wrath, the critical hit rate will increase as well.

At the beginning of Stormblood, if the Warrior changed stances the gauge would lose half of the gained Wrath. As of the most recent patches stances can be switched freely.

In PvP, the gauge is used to fuel specific abilities and can be refilled by utilizing combo attacks.

Marauders' and Warriors' Limit Breaks focus on drastically raising the defense and magic defense of the entire party for a short period of time. They both have the same Level 1 and Level 2 limit breaks as other Tanks.

Square Enix's Eorzea Cafe served a dish called "Roast beef of monsters ~hunted by Marauder~" whose description translates to: Wild beasts hunted by the rock-shattering Marauder done roast beef style. Lather up your opponents in bloodbath sauce and smite them down! 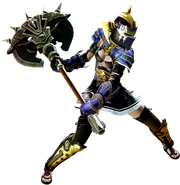 The Adventurer stand in as a Warrior in The End of an Era.

A Hyur Warrior in A Realm Reborn.

A Hyur Warrior without his helmet. 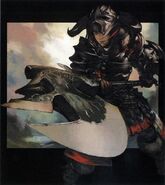 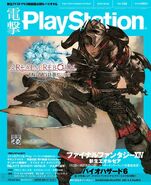 Warrior on the cover of Dengeki PlayStation magazine.

A Marauder as seen in the 25th Anniversary Poster of Final Fantasy.

Warrior's victory pose.
Add a photo to this gallery 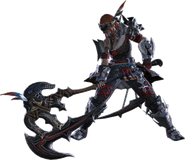 Inner Chaos.
Add a photo to this gallery

Deliverance.
Add a photo to this gallery

[view · edit · purge]A marauder is someone who engages in banditry such as: looting, piracy, robbery, and theft.