Warriors are weapon experts. Their Advance ability allows them to deal even more damage than normal, but they also get hit a lot harder.

The bearer of this certificate has experienced countless hours of rigorous battle and is deemed worthy of the title of Master Warrior.

The Warrior, also known as Fighter, is a job class in Final Fantasy III gained from the Wind Crystal. In the opening FMV of the remakes, Luneth is depicted as a Warrior. Warriors have a high aptitude for wielding swords in battle. Having focused all their training on physical combat, they cannot use magic.

The Warrior (Fighter) has no special command. Initially, they are the power houses, providing the best boosts to all physical stats. Once the Knight job is unlocked, this job loses its usefulness.

The Advance command lets the Warrior sacrifice some defense in order to strike harder. Both the damage bonus and defense reduction are related to the Warrior's current job level using the following formulas:

Which give the following results: 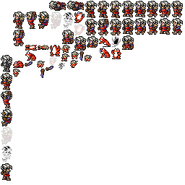 Arc as a Warrior.

Refia as a Warrior.