Three gods descended from the heavens. Fearing one another's power, the gods began to war. Those mortals caught amongst their fighting became espers, and were forced to fight endlessly as slaves to the gods.

Golden statues within the Esper Caves

The Warring Triad (三闘神, Santōshin?, lit. Three Warring Gods), also known as the Statues and Gods, are, according to legend, collectively the gods of magic and the beings that created the espers in Final Fantasy VI. They are named Demon, Fiend, and Goddess.

Three gods descended from the heavens and, fearing one another's power, began to war. The mortals caught among their fighting became espers and were forced to fight as slaves to the gods. The gods realized the chaos their fighting was causing and agreed to seal away their power. They returned the espers' free will and turned themselves to stone with the last words left for the espers being, "Never must we be woken." After the War of the Magi the espers fled the world to a new realm and took the Warring Triad's petrified remains with them. The Triad were placed in a delicate balance of power, and it was said catastrophe would occur if they were moved out of position.

A thousand years later a man named Gestahl rediscovered the secrets of magic. He built up an Empire and invaded the esper world, kidnapping espers and draining their powers to be used in Magitek technology to conquer the world. Kefka Palazzo knows of the Warring Triad and plans to reawaken them. After discovering magicite, the true power of the espers, Gestahl invades the espers' world with Kefka, raising the Floating Continent with the Warring Triad's power at his fingertips. Kefka has other ideas and demands for the Warring Triad to use their full power, with Gestahl being against it. Kefka seizes the Triad's power and uses it to murder Gestahl. Kefka moves the statues out of alignment, shifting the face of the world.

Kefka uses the power of the Triad in the World of Ruin to exert his destructive will on any city that resists him, using a ray of energy called the "Light of Judgment" to burn anyone who opposes him, or destroy entire towns. When the party raids Kefka's Tower they destroy the Triad to get rid of Kefka's power source. This worries Terra, who is half-esper and half-human. The Triad are the source of magic, and thus the espers' life force. If the Triad were destroyed espers would die, possibly including Terra. By this point Kefka had drained most of the Triad's power into himself and thus become the source of magic. After Kefka is defeated, Terra survives as a human without the espers' magical abilities because of her strong feelings for the children in Mobliz.

The Warring Triad are fought as bosses in Kefka's Tower. The triad is linked to the three principal elements. Fiend corresponds to Ice, Demon to Fire, and Goddess to Lightning.

Three statues in the Desert Palace appear to be an allusion to the Warring Triad. The outer statues are demonic creatures titled "Promise of the Evil God" and "Truth of the Devil." The middle statue is angelic, and is named the "Illusion of the Goddess."

The Japanese name of the "Ruthless" paradigm—(撃滅の戦鬼, Warring Demons of Destruction?), consisting of a Commando, a Ravager, and a Saboteur—may be a reference to the Triad.

The Warring Triad is a group of three primals: Sephirot, the Fiend; Sophia, the Goddess; and Zurvan, the Demon. They were the first primals that the Allagan Empire successfully bound, a technology they later used in the construction of Dalamud. They remain bound in Azys Lla, presumably inside the Flagship at the center of the floating continent. Three statues in the middle of Azys Lla are carved in their likeness, and they are otherwise identical to their appearance in Final Fantasy VI.

Archbishop Thordan travels to Azys Lla to use the power of the trapped primals to become a god-king that would put an end to all conflict. He is defeated by the Warrior of Light but his activation of Azys Lla and his drawing upon the Triad's power begins a process of awakening and Urianger Augurelt calls upon the Warrior of Light's help. 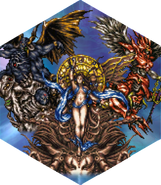 Kefka's EX Burst is titled Warring Triad. The input sequence to power up the attack features three controller commands appearing over Kefka in a triangle formation in the same positioning as the Triad's statues. The circles surrounding the commands when they appear are colored in the same pattern as the Triad's color scheme: the top circle (Goddess) is blue, the left circle (Fiend) is yellow, and the right circle (Demon) is red.

Warring Triad is mentioned in the Mognet letter sent by Kathy, who tells the player of their luck for the day. Kathy describes the Warring Triad as their nemesis for always being able to keep the 'battle-relationship' "fresh."

Kefka's Dissidia EX Mode card refers to his draining of the Triad's power with its effect. Instead of paying Kefka's cost to play him from the hand, the player may instead send three Backup or Forward cards of different elements to the Break Zone.

According to the Final Fantasy Ultimania Archive Volume 1 guide, the Crusader magicite is said to be a fragment of the Warring Triad's power, with the Cleansing summoning attack depicting their final battle, with friend and foe being caught in the crossfire. [1] This was previously referenced in the Playstation bonus feature on the espers, which describes Crusader thusly: "This holy war between demon, devil, and goddess damages friend and foe alike". This is also alluded to in Final Fantasy Dimensions II, where the individual signets for Demon, Fiend, and Goddess, use the same summon attack as Crusader with a suffix designating the god's name.

Battle sprite of the Goddess (iOS/Android/PC).

Battle sprite of the Fiend (iOS/Android/PC). 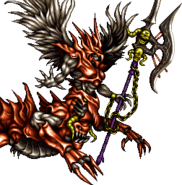 Battle sprite of the Demon (iOS/Android/PC).

The Statues on the Floating Continent (GBA).

The golden likenesses of the Warring Triad in the Esper Caves.

The Warring Triad statues in the Esper Caves (iOS/Android/PC).

The Fiend in battle (iOS/Android/PC).

The Goddess in battle (iOS/Android/PC).

The Demon in battle (iOS/Android/PC).

[view · edit · purge]A triad is defined as a "group of three". The number three occurs with great frequency in mythologies and religions found across the globe.

The Warring Triad is thematically based on numerous mythological depictions of trinities of gods. One such trinity are the Japanese deities Amaterasu, Susanoo, and Tsukuyomi; Amatersau is the sun goddess and strongest of the three, Susanoo is the storm god, and Tsukuyomi is the moon god. The three were born when Izanagi bathed after a journey to the underworld to retrieve his lost wife, the goddess Izanami, and the three siblings were washed out of Izanagi's eyes and nose. Though the three are siblings they are opposed to each other, Amaterasu and Tsukuyomi having a falling out when he killed the food goddess Uke Mochi, while Amaterasu and Susanoo were always locked in a feud.

The Triad may also be based on the Greek goddesses Hera, Athena, and Aphrodite; Hera is the queen of the gods, Athena is the goddess of wisdom and war, and Aphrodite is the goddess of love and beauty. In the story of the judgment of Paris, the goddess of discord, Eris, threw an apple amidst the three that was inscribed "for the fairest". The three began to argue over who was deserving of the apple, and a mortal man, Paris, was asked to be the judge. The three each offered Paris a bribe and he chose Aphrodite, who had promised him the most beautiful woman in the world. This woman was Helen of Troy, and the gifting of her to Paris ultimately led to the events of the Trojan War.

In the original concept artwork by Tetsuya Nomura, the Warring Triad are named beyond their basic titles: the Goddess is Sophia, the Demon is Zurvan, and the Fiend is Sephiroth. The Warring Triad's primal counterparts in Final Fantasy XIV retain these names with Sephiroth's spelling changed to Sephirot to disambiguate from the Final Fantasy VII antagonist.

[view · edit · purge]Sophia, Greek for wisdom, is a central idea in Hellenistic philosophy and religion, Platonism, Gnosticism, Orthodox Christianity, Esoteric Christianity, as well as Christian mysticism, and is commonly represented as a goddess. Sophia is also a primary deity in Gnosticism.

As a feminine given name of Greek origin, Sophia retains the meaning of "wisdom", with variant names Sofia and Sophie among others in Western culture.

[view · edit · purge]In Zurvanism, Zurvan is the god of infinite time (and space) and is Aka Manah ("one", "alone") deity of matter.