Final Fantasy XV Ultimania Scenario Side describes warping as a form of magic. To warp, one must use the magic of the kings of Lucis, either by being royalty, or by the king lending his power with others like with the Kingsglaive and King Regis. Appropriate training is also required.[1][2] The training requirement may be the reason Noctis's retinue does not warp in Final Fantasy XV outside of the one battle with the adamantoise[3] where Noctis seems to warp all of them. Noctis himself started to practice warping after his 16th birthday,[1][4] likely with the Engine Blade he received as present from his father.[5] The persons known to be able to warp are Noctis, Regis, the members of the Kingsglaive, the Old Wall statues and their spirits[note 1], Ardyn Izunia, and the Eroder in Close Encounter of the Terra Kind.

In Chapter 1 of Final Fantasy XV: Episode Ignis, the player can use a hookarm that works similarly to Noctis's warp from the main game.

Warping costs 30 MP. Pressing the Warp button without a "destination" is a "free-warp" (added in the Crown Patch), and propels Noctis forward in the direction he is facing. It is the only type of warp that can be used outside of battle, although it still can't be used in towns and outposts, when an indicator is on-screen, or in dungeons (unless in a battle). Like with phasing, warping leaves behind blue silhouettes of Noctis.

Free-warping can allow the player to reach some locations they can't otherwise get to by jumping. Noctis cannot free-warp through solid objects, and can only free-warp once in mid-air outside of battles. Warping in mid-air will mitigate fall damage (whereas swinging a weapon will not). When used in battle, it can be useful for dodging or quickly covering ground, but still deals minor damage if Noctis throws his weapon into an enemy, and has a small period of invincibility, like a dodge roll. Some enemies' grapple attacks will bring up a prompt, allowing Noctis to warp out of danger.

Noctis can free-warp with any weapon type except machines. Daggers and the Katana of the Warrior have especially fast warp animations. Free-warps with the Ring of the Lucii, the Cerberus rifle, and elemancy are quicker than with weapons, but do not damage enemies and cover slightly less distance.

Warping to out-of-the-way locations and objects is called a point-warp, done by holding the Warp button while a warp indicator is visible on-screen. It fully restores Noctis's MP, but gradually drains his stamina gauge if he is left hanging from the area to which he warped. When Noctis's stamina runs out, he falls. Hanging is considered a form of cover, and Noctis's HP replenishes at an expedited pace. Performing the first point-warp suspension earns the Just Hangin' Around achievement/trophy.

Noctis can point-warp with anything equipped; the weapon model used for hanging from structures is Noctis's equipped one-handed sword; if he has none equipped, he is shown using the basic Broadsword model. Noctis can only point-warp when in battle, with a few minor exceptions (i.e. in Adventurer from Another World, the player can warp back to where they fell off from during a platforming sequence.) If the battlefield has multiple point-warp spots, Noctis can freely travel between them.

Warping to enemies and subsequently dealing damage to them is called a warp-strike. The farther away from his target Noctis is, the greater damage warp-striking deals. Once the damage multiplier exceeds 3.0, warp-striking is almost guaranteed to put any non-boss enemy in a vulnerable state, though not all battlefields have enough space for this. Warp-striking to enemy appendages from afar can also be a good way to break them off.

The player can further increase the damage output of warp-strikes through the Ascension grid. Slaying an enemy with a warp-strike grants 1 AP. Some battles offer extra AP for completing an objective, requiring Noctis to perform a warp-strike that deals double damage. If the player is using character swap, a confused and AI-controlled Noctis will try to warp-strike into the sky and then fall onto the ground.

Warp-striking can't be performed with machinery, magic, the Ring of the Lucii, or the Cerberus. Royal arms often have unique warp-strikes, as does the Mutant Rakshasa Blade. The Ragnarok is a Season Pass-exclusive weapon that significantly boosts warp-strike damage, with a unique sound and red hue, at the cost of being slower to execute.

Invoking Armiger turns all of Noctis's movements into warps for its duration, and he gains a unique lengthened warp-strike consisting of multiple weapon swings. Noctis will be in a sustained Armiger mode during the boss battles against Leviathan and a phase of the final boss, where moving or pressing the jump button will also cause him to warp. In Armiger Unleashed, warp-strikes vary depending on the distance to the target, with farther distances resulting in more complex combos and damage, though they take longer to execute.

When infiltrating imperial bases, Noctis can use warp-kill to instantly defeat imperial troops. He cannot use this ability if he is detected.

The player can unlock abilities that enhance Warp from the Ascension.

Players can warp to move in whatever direction the character is moving, and warp-striking quickly moves to a target and attacks them. If an enemy is parried, the enemy cannot move, and will be open to linked warp-strike for a short time. Point-warping allows players to hang from surfaces.

The members of the Kingsglaive can warp due to tapping into the king's magic powers. Nyx Ulric warps by throwing his kukris. When the king perishes, Nyx loses his ability to use magic, including the ability to warp, but regains it after he makes a deal with the kings of the old. The statues of the Old Wall can warp, and at one point, Nyx digs his weapon into The Mystic's statue and accompanies it as it warps away.

Warp is Noctis's EX Skill. He throws his sword at a designated area and warps to it. He has one charge at the start of a battle and can charge up to three times throughout. 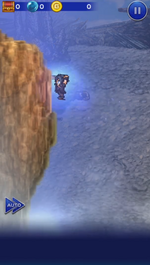 Shift Break is an active physical ability that inflicts neutral physical damage on a single target for 8 AP. It has very high topple strength. It can be used by Lann (Noctis's Champion Jewel).

Noctis teleporting and materializing weapons from thin air was already present in the extended version of the E3 2006 reveal trailer of Final Fantasy Versus XIII, released in 2007 on the Dengeki Cloud DVD. Noctis is shown engaging soldiers with his crystalline weapons while remaining immune to their attacks as the weapons shield him from harm. His ability to teleport is showed as well as his ability to warp to his weapons and scale a building this way.

Past trailers, as well as earlier demos, showed Noctis point-warping to any weapon he has equipped. The final game launched with three generic hang animations (basic blade, Engine Blade, and Blazefire Saber). As of patch 1.23, all one-handed swords appear in point-warp animations, but no other weapons. Episode Duscae had spears as point-warp weapons as well, and in the Platinum Demo the player could point-warp with all weapons present with the adult Noctis, including the Star of the Rogue.

In the TGS 2014 trailer, Noctis can be seen point-warping outside of combat.