This warrior's magicked blade seeks out the weakness of its target. 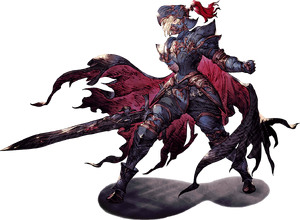 The Warmage (魔剣士, Makenshi?, lit. Magic Swordsman), also known as Dark Knight or Knight of Darkness, is a recurring job in the series. First introduced in Final Fantasy III as a unique melee job able to cast weaker White Magics, later installments would have the job altered to become an alternate variant of the recurring Dark Knight job, giving it the ability to perform the Darkness ability and absorption magics.

The Dark Knight is a job class obtained from the Water Crystal. They are trained to harness the negative energies that flow throughout the world. The dark blades they wield are effective against monsters that divide and multiply.

The Warmage is an enemy job class available to viera units. Many of their skills derive from the Mystic Knight job, such as Fire Sword, Blizzard Sword, and Lightning Sword. Their appearance is based on the Fencer class in Final Fantasy Tactics Advance.

While not a job class available to players, the character Branden takes on the role of the Knight of Darkness when on the Source. It functions similarly to the Paladin job.

However, due to Knight being used as the Japanese name for the Paladin job in Final Fantasy XIV, Brynden's job title in Japanese is instead Magic Swordsman (魔剣士, Makenshi?), being named after the Dark Knight job in Final Fantasy III, likely a reference to the job acting similarly to the recurring Knight and Paladin in the original Famicom versions of the title.

The Dark Knight appeared as a character card.

Duane's job class is Warmage. His skillsets include the Darkside ability, along with several Break-type and Black Magic abilities. His Limit Bursts focus on dealing heavy physical dark-elemental damage attacks, while also absorbing the enemy's HP.

Duane once again appears as a Warmage, with the job's name being translated as Dark Knight of Remorse (悔恨の魔剣士, Kaikon no Makenshi?, lit. Magic Swordsman of Remorse). The job's abilities focus on dealing dark-elemental damage and inflicting several different debuffing effects to enemies.

Though there is no job system, Cloud Strife was listed as a "Magic Swordsman (魔剣士, Makenshi?)/Berserker" during development. Although that did not make it to the finished product, Cloud bears some traits of the Warmage such as using swords in combat and being elite both physically and magically.

The Hellblade exclusively appears as a job in Bravely Default II, with the Asterisk holder being Adam Holograd. Being a fusion of the series' recurring Spell Fencer and Dark Knight jobs, the Hellblade's Diabolism skillet focuses on sacrificing heavy portions of HP and MP to attack enemies with elemental imbued swords.