It takes a muscle-bound warrior to wield this heavy hammer, and a swift one to avoid it.

The War Hammer (ウォーハンマー, Uōhanmā?), also known as the Warhammer, is a recurring weapon in the series. It is often a mid-ranked hammer or axe, depending on the game, that boasts a decently high Attack power, but offers no special abilities.

A hammer that strikes hard.

War Hammer is the most powerful hammer, and can only be used by Knight, Ninja, and White Wizard. It has an Attack of 30, and is found on the ninth floor of Hellfire Chasm, which is only found in the Dawn of Souls and 20th Anniversary versions.

Hammer made for combat. Can be used two-handed.

War Hammer, known as Warhammer in the RPGe translation, is a mid-ranked hammer that can be bought in Regole, Quelb, or Castle of Bal for 6,400 gil, or be stolen from Bio Soldier or Reflect Knight. It has an Attack of 35.

Warhammer is a lower-level hammer for White Mages.

War Hammer is a low-ranked hammer that provides 65 Attack and 2 Evade. Like all hammers it has 2.63s charge, and 1.2s action time, making it average what it comes to attack speed.

War Hammer is first available in Jahara for 5,200 gil, and requires 20 LP to equip via the Axes and Hammers 2 license. It can be found in a chest in the southwest of the Dalmasca Estersand (The Yoma) with approximately 40% chance of containing the the hammer.

In the Zodiac versions, it now provides 42 Attack, 2 Evade, 32 CT, 8% combo rate, and requires the Axes & Hammers 3 license for 35 LP. It can be bought in Rabanastre, Bhujerba, Dalmasca Westersand, Nam-Yensa Sandsea, Tomb of Raithwall, Balfonheim Port for 2,500 gil, found as a treasure in the Ogir-Yensa Sandsea (East Junction), Phon Coast (The Vaddu Strand), or stolen from Hybrid Gator (3% chance). it can be equipped by the Foebreaker class.

War Hammer is the second available hammer, and provides +34 Attack and +5 Resistance. It teaches the abilities Strong Arm to Vikings and Shell to Green Mages, and can also be used by the Chocobo Knight. It can be bought for 1,100 gil in the shop after creating it in the Bazaar after using a Cruzle Brass, Cottonflue, and Cloudy Sap.

War Hammer is a high-ranked mace that boosts Strength by 19 and Range by 3, but lowers Agility by 3.

The sword and the lance were considered formidable weapons despite the fact that they were not always effective against heavily armored opponents. An opening in the armor was essential to deal damage with these sharp weapons, but targeting such small crevices during battle was extremely difficult. Thus, the war hammer was created to crush armor instead of cutting through it. Its size is bigger than that of a regular hammer, and its head resembles a pickaxe.

War Hammer is a Hammer obtained by buying it for 1,700 gil at Felicitas Town, Village of Ambel, Town of Amore, and Downtown Zoldaad, by crafting it using 340 gil, x12 Silver Ores, x8 Iron Ores, and x3 Lumbers, and by completing the quest The Hungers Game. It provides 30 ATK. 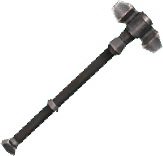 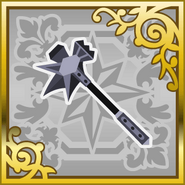 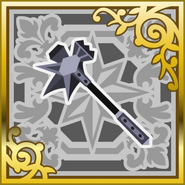 [view · edit · purge]A war hammer is a late medieval weapon of war intended for close combat action, the design resembles the hammer. Its appearance is similar to that of an ice axe.