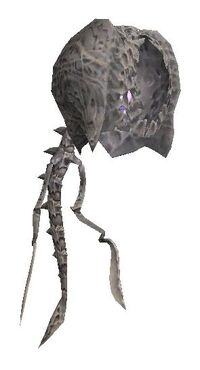 Wanderers are a variety of Empty in Final Fantasy XI, born of the memories of souls lying inside Promyvion. They can associate themselves with any element, as indicated by the glow of their cores, and their weaknesses and resistances depend on that element. Wanderers can be found in all areas of Promyvion and can drop Memories and Recollections when they are defeated.

Drifting aimlessly through the void of Promyvion, wanderers resemble floating brains. Contrary to their appearance, however, their behavior shows no hint of intelligence. In their endless hunt for memories, other species of the Empty often prey upon the relatively small but abundant Wanderers.

In Abyssea - Konschtat, where the Crag of Dem has vanished, one particular wanderer, known as the Meanderer, has escaped Promyvion, and wanders the highlands unseen except to those with Clear Demuline Abyssites.