Waltz for the Moon

You're the best looking guy here. Dance with me?

The "Waltz for the Moon" scene in Final Fantasy VIII is a notable event due to its importance to the game's plot as well as its provision as an ample demonstration of the then new motion capture animation and graphics. The game's protagonist, Squall Leonhart, first meets his love interest, Rinoa Heartilly, in this scene in a way reminiscent of old style war-time romance movies. The scene's initially rocky beginning and, by the end of the waltz, the pair's synchronization, could be seen as symbolism for the way the relationship between Squall and Rinoa plays out. It is a tradition in Japanese schools to perform folk dances or waltzes as an event near the end of a sports festival.

The waltz is a standard ¾ time waltz with at least eight steps that are performed and repeated in time to the music. The song "Eyes on Me," the base for the waltz, was created around eighteen years before the game's events.

A recently graduated Squall attends Balamb Garden's SeeD inauguration ball out of necessity. Standing off to the side due to his anti-social nature, he makes no attempt to socialize until a girl in an ivory dress, Rinoa, approaches him and requests a dance.

Attempting to ignore her, Squall tells her that he can't dance. Rinoa remains persistent, however, and drags Squall out onto the dance floor, where she attempts to coerce him into performing the waltz like the other couples. Through Rinoa's determination and understanding, Squall learns the steps, and the pair quickly become proficient dance partners. However, as abruptly as she arrived, Rinoa departs, thanking Squall for the dance.

"Waltz For The Moon"

"Waltz For The Moon" plays when Rinoa forces Squall to dance with her. It is a waltz version of "Eyes on Me", the game's vocal theme song.

The start of Eulmore's second theme in Final Fantasy XIV opens up like the "Waltz for the Moon" before going into its own unique theme.

"Waltz for the Moon" plays in the music player in Final Fantasy XV after the player buys the Memories of FFVIII soundtrack from Hammerhead for 100 gil.

The dance was performed by Wataru Hirano and Yasuko Yokokama and motion captured for the game.

In one of the windows outside the Artnia café is a display containing a crystal chandelier, a suspended wall mirror and a candle lit dresser in front of a red curtain. Beside the dresser is a silhouetted figure of Rinoa Heartilly in her "request pose" that she performed when asking for a dance with Squall Leonhart.

The dance scene was used for a technical demonstration showing off the graphic card capabilities of the PlayStation 2. The demonstration features some additional steps to the waltz.

The waltz scene appears as a player icon.

The scene appears as as the Event Music Stage for Final Fantasy VIII.

Yoshitaka Amano's artwork of Squall and Rinoa dancing appears in a trading card. Like all of Squall's cards, it is ice-elemental.

Issued by Squaresoft, only 3,000 of these cold casts were made, each coming with a card and card stand that had the statue's limited number and description. The series has been out of production since 1999. 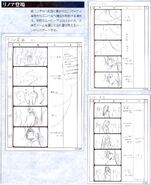