Walse Meteorite, also called Walse Meteor, is a location in the Bartz's world in Final Fantasy V. It is located just north to the town of Walse, east of Walse Tower, and appears on the world map only after speaking to King Walse in Castle Walse. It does not become accessible until the water crystal has shattered.

The meteorite was used by a soldier from the Castle of Bal to travel from Galuf's world to Bartz's world.[note 1] The Walse Meteorite landed while Lenna Charlotte Tycoon attempted to persuade King Walse to deactivate the water crystal amplification machine. Alarmed by this, King Walse and his men set out to see after the water crystal.[1] Following the Meteorite's landing, a raging Garula controlled by Exdeath[note 2] attacked Walse Tower and shattered the crystal. The soldier that used the meteorite was killed by the Garula.

After Walse Tower sunk, Bartz Klauser, Lenna, and the others used Walse Meteorite to find a teleporter to the Karnak Meteorite, in order to reach the fire crystal.

Later, after the earth crystal had shattered and Galuf returned to his planet, the party revisited the meteorite one last time alongside Cid and Mid Previa in order to collect some adamantite. Upon attempting to leave the area, the party had to face an enemy party of six Purobolos in battle.

Walse Meteorite can only be entered after completing Walse Tower. At this point, the player must use the teleporter inside Walse Meteorite to reach the Karnak Meteorite.

Later, the tower is revisited after completing Ronka Ruins and after first visiting the Tycoon Meteorite, with a party of Bartz, Lenna, and Faris Scherwiz. Here, six Purobolos are fought as a boss to obtain adamantite. The Purobolos should all be defeated at once, meaning the Summoner job using Titan is ideal.

"Four Hearts" plays outside the meteor while "Dungeon" plays inside. 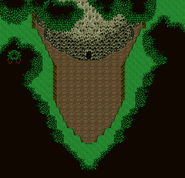 In the pre-GBA versions they were known as meteors. [view · edit · purge]A meteor or "shooting star" is the visible streak of light from a meteoroid or micrometeoroid, heated and glowing from entering the Earth's atmosphere, as it sheds glowing material in its wake. Meteors rarely explode in the Earth's atmosphere. The term has become associated with quickness with the adjective "meteoric". In the context of myth and superstition, meteors and comets sighted in Ancient and Medieval Europe were once held as ill omen, said to be the message of the heavens' displeasure of man's affairs to herald grave catastrophes.

Seeing that meteor refers to a piece that does not withstand atmospheric entry, the meteors were renamed meteorites to the GBA and following versions of Final Fantasy V.