Walse, also known as Walz, is a location in Final Fantasy V. It is a prosperous country with many rivers and forests brought to fruition by the water crystal. The town is accessible in Bartz's world and is the first that allows the player to buy summoning magic. Castle Walse is situated next to the town, and Walse Tower, where the crystal is situated, is located to its northwest. The town is entirely optional, but is worth visiting to purchase magic.

Using a device created by Cid Previa to amplify the water crystal's power,[1] King Walse was able to purify the water around Walse. The purified water protected Walse from monsters, and even sealed Shiva away in Castle Walse.[2][3] Garula, a beast from the forest near Walse Tower, also came to the village at times and was loved by the residents, described as a shy creature.[2] The town was also home to some criminals, including Lone Wolf the Pickpocket, locked up in Castle Walse's dungeon alongside two others.[3]

Bartz Klauser and the party arrive at Castle Walse on the back of Tycoon's wind drake to save the water crystal, after the wind crystal had been shattered. Not wanting to disable it and endanger the town, King Walse declined Lenna Charlotte Tycoon's pleas, and assured her the crystal was safe.[4] Shortly after, a meteorite fell near the tower, the water crystal was destroyed by a raging Garula possessed by Exdeath,[note 1] and the tower sunk.[5] Afterward, King Walse regretted his mistake and implored Lenna to save the fire crystal in Karnak.[3]

In the merged world, after Exdeath obtains its power, Walse was sucked into the Void.

The town of Walse is located to the south of the eastern continent. It is directly adjacent to Castle Walse, and both are surrounded by a large moat crossed over by bridges. The moat surrounding the town is purified water that comes from Walse Tower,[2] located a fair distance away to the northwest.

Water also runs through the town itself. The town is mostly situated on a cobblestone walkways elevated above a moat below. The buildings seen in the town are its shops (an item shop, a weapon shop, an armor shop, and a magic shop), an inn, and one house adjacent to it. The house can only be reached by stairs from the moat below, suggesting some residents routinely walk through the water below the elevated streets.

The background music for the Town of Walse is the Final Fantasy V "Town Theme."

The town of Walse (GBA). 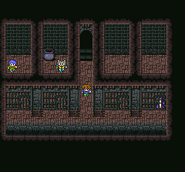 Walse on the World Map in Bartz's world (GBA).

In Dissidia 012 Final Fantasy, there is a trade material called "Walse Fabric". The item's description mentions it was soaked in sacred water and is constantly damp, likely referring to the water spring where Shiva makes her home.

There is a talking frog in Walse that refers to both a comic based on Final Fantasy III and the game Final Fantasy IV. There is a line in a 4-panel comic done by Yoshida Sensha back when Final Fantasy III for the Famicom was released where frogged party members discuss it not being so bad being a frog, and that they should forgo saving the world and opt living as frogs instead. Someone at Square decided to quote this comic in the next two Final Fantasy games. In Final Fantasy IV the player can interact with frogs in Troia Castle moat. All the frogs in the Japanese version make frog sounds except for one, which says "It's nice being a frog..." This was translated in various ways for English. There is also a secret talking frog in Walse that says the same thing in Japanese. In the Final Fantasy V PlayStation translation this was translated as "frogs are lucky". The GBA translation makes a Kermit the frog reference with "It's easy being green, dig?"