A fortress city with some ten centuries of history, protected by thick stone walls built to repel invaders.

Walled City of Yardrow, also known as Yardow Fort City (城塞都市ヤードー, Jousai-toshi Yādō?) is a location from Final Fantasy Tactics. It is located east of Riovanes Castle and north of the Royal City of Lesalia. As Ramza Beoulve passed through the town on his way to Riovanes, Marach Galthena attempted to ambush him, but the attack failed because Marach's sister, Rapha Galthena, chose to defect as Ramza approached. 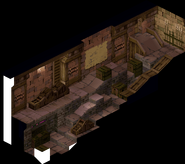