The field is visited first in Chapter 9, "The Town That Never Sleeps", as Cloud and Aerith aim to help Tifa interrogate Don Corneo. During this time, the three participate in several quests to win approval from Corneo's henchmen in order to be allowed in his mansion. In Chapter 14, "In Search of Hope", Cloud, Tifa, and Barret return to once again ask questions to Corneo, and complete various sidequests while there.

You gotta let go of your inhibitions and set yourself free! Indulge your wildest fantasies! What happens here, stays here! After all, baby—you're in Wall Market! That's just how we do!

Throughout Wall Market, many non-player characters are located, and approaching them will allow the player to overhear dialogue. Among the stores in Wall Market, only a few can be entered and interacted with by the player.

Wall Market also has several small alleys containing items in chests. In chapter 9, these alleys are blocked by people, and the player cannot get past them to grab the treasures tucked away here. In chapter 14, treasure can be obtained. The northeast alley below has a chest with a moogle medal, the alley behind the item shop as an elixir, the alley opposite the Honeybee Inn has a sorcerer's armlet, and the west-most alley has a

Chadley is located near the center of Wall Market. The southeast area (left from the south entrance) has a jukebox with the

Under the Rotting Pizza disc. In the northwest, close to the Honeybee Inn, is a set of stairs up to a saloon-looking building, where

Farm Boy can be obtained by talking to the "Cowgirl" non-player character.

Located at the south Wall Market entrance, Chocobo Sam can be found just outside during some quests, first during "Chasing Tifa", and next during "Sam" in "The Trio". In Chapter 14, "In Search of Hope", Sam offers the "Chocobo Search" quest; partaking unlocks fast-travel locations all around the slums for Sam's Delivery Service.

Located just left of the south entrance, the innkeeper allows the player to stay overnight, restoring HP for free. A few non-player characters can be spoken to in the rooms, and Johnny's Father can be found inside during chapter 9. In one of the empty rooms, a treasure chest contains a bottle of adrenaline

On first visit, outside the inn is a barker who offers a room for a couple; regardless of the option selected, Aerith the two will not take up the offer. In "The Party Never Stops", the vending machine can be used for items.

Located just right of the south entrance, the Item Store does not actually sell items. A barker outside will advertise the "fully automated state-of-the-art item procurement machine" inside, but inside, interacting with the computer terminal will simply cause it to shoot at Cloud as he backs up immediately. After talking to the Barker outside, he will muse there must be an issue with faulty wiring.

Located centrally, close to the south entrance, the Pharmacy actually sells several restorative healing items, as well as the music disc "Honeybee Inn". In "The Party Never Stops", pharmacy coupons can be traded here for items.

The Diner is located just west of the inn in a small compartment and is visited for a sidequest. Though the restaurant owner can be talked to, no character can otherwise by interacted with. In "The Party Never Stops" sidequest, the owner will give a pharmacy coupon.

Located in the northeast portion of Wall Market, the Materia Store owner can be talked to to purchase materia. It is later relevant for a sidequest.

Madam M's Parlor is located in the northeast end of Wall Market by the north entrance, and visited for a variety of quests involving Madam M. Prior to the quest "Madam M" in "The Trio", the door is locked; during "The Trio" after completing the "Chocobo Sam" and "Andrea Rhodea" objectives, Johnny will walk out of the parlor, at which point it can be entered by the player.

Located in the northwest portion, the Honeybee Inn is comprised of two subareas, Reception and Honeyhall. The Honeyhall can only be entered for certain quests, though the Reception is visitable at all times.

Just west of the Honeybee Inn through a fence is an alley nearby, where a Honeygirl can be talked to. Talking to her more will reveal this is Ms. Folia, who admits dancing is her passion and asks not to inform the Leaf House children.

Located at the west end of Wall Market, the boutique has several non-player characters inside, and the Clothing Store Owner's Son can be talked to but will only give a few lines of dialogue. It is relevant "The Party Never Stops".

Located near the southwest area, the bar, named Drunkards, has several non-player characters, and a karaoke booth where

The Midgar Blues is obtained by talking to the singer. The "Clothing Store Owner", the "Man in Line", and the "Patient" can be talked to, but all will give only a few lines of dialogue outside the sidequest "The Party Never Stops".

Located near the southwest end of Wall Market just east of the Colosseum, the gym is visited for the Squats minigame in "Burning Thighs" during chapter 9, and the Pull-Ups mini-game in "Wavering Heart" during chapter 14. Several non-player characters are also seen working out. There is a treasure with a Headband accessory in the shower room.

In the room backstage by the arena, a vending machine and bench are located. This room is empty at first, but after the first match, flowers are seen on the table. Larger gifts are sent to the room after the finals match during "Underground Colosseum" is complete, located outside.

Situated at the southwest on the way to Corneo's mansion, the vendor sells armor, accessories, and notably, the

Located in the southwest end of Wall Market by taking the path right (west on the map) from the path to Corneo's mansion, the Urban Advancement District comprises a linear route to a wall as a dead end, which is only relevant in chapter 14. When visited then, a man in a blue shirt gives

Wutai when spoken to. The Urban Advancement District is a fast-travel location for Sam's Delivery Service.

After completing 24/26 Odd Jobs (as many as can be completed in a single playthrough), the Letter from the Guardian Angel, and a

The Front Entrance comprises the area just in front of Corneo's mansion, at the south end of Wall Market. Just in front of the bridge to the right is a chest containing 1,200 gil.

In the building itself, Leslie Kyle can be spoken to. Outside of specific quests, the building cannot be explored further, as Leslie and two other bouncers block the way.

Don Corneo's lackeys hang out in their own "break room" while at the manor, and this is where the girls whom the Don rejects are delivered to be given to Corneo's henchmen. It is a much more barren room than the rest of the manor, with a basic tatami floor, small windows and modest amnesties like a small TV and a desk fan on the floor. There is a Molotov Cocktail in the treasure container in front of the TV

Don Corneo's basement room leads to his private quarters by way of narrow steep stiarcase. It has various torture devices, and a vending machine with a unique design that sells

Don of the Slums. There is a treasure for turbo ether here

. Returning here in Chapter 14 finds Kotch tied up and a

should the player free him. (This will be a

Healing Materia in a repeat playthrough.)

The central foyer has stairs leading up to Don's and his lackeys' personal quarters. There is a Fury Ring hidden under the stairs; the player needs to squeeze through the gap between the furniture to get it

Corneo's room is divided in two halves: the "office" and the bedroom. The office portion has a passage to the basement. During the audition, the candidates line up in the office for Don to make his pick. His bedroom has a large extravagant bed, karaoke equipment

, and hidden cameras for documenting everything that goes on there for blackmailing purposes. The room is bathed in strong red lights and draped in luxurious exotic items. The large empty space in front of the bed conceals a trapdoor to the sewer system where Corneo's "pet" Abzu lives.

The Town That Never Sleep[]

The latter half of chapter 9 takes place in Wall Market with a party of Cloud and Aerith as they look for a way to enter Corneo's mansion. These are primarily non-combat quests in which the two must try to win the favor of the Trio, and only Madam M initially obliges. The Discovery quest "Vagabond Johnny" appears and involves a single cutscene, but it can be ignored; completing this will have a moderate effect on events later in the chapter. A few combat quests take place in the Corneo Colosseum during "Underground Colosseum", as the Cloud and Aerth battle several enemies including the Hell House.

Following these, several Odd Jobs become available as Cloud only, and depending on actions throughout the chapter, one of two questlines may take place. One gives quests "The Party Never Stops" and "A Dynamite Body", where the former is a non-combat quest in which Cloud must interact with non-player characters in stores around Wall Market and the latter is a battle in the Colosseum. Another gives the quests "The Price of Thievery" and "Shears' Counterattack", where the former is a combat quest that takes Cloud to the Collapsed Expressway, and the latter is another battle in the Colosseum. Regardless of questline, "Burning Thighs" appears in both, a quest in which Cloud takes part in the squats minigame.

The final quests take place in Corneo's mansion, with little combat involved, although Tifa joins the party briefly for a few battles leading to the following chapter.

Wall Market is visited only briefly by Cloud, Barret, and Tifa, as they run through during "Words of Hope". The market is filled with Sector 7 refugees, and there is little to do interact with until the following chapter.

In Search of Hope[]

Two of the Main Scenario quests take place in Wall Market: "Intel Gathering", in which Cloud, Barret, and Tifa travel to Don Corneo's place to find a way to the top of the plate, and "Over the Wall", the final quest of the chapter.

Many of the Odd Jobs in the chapter take place in Wall Market. "The Power of Music" is a non-combat quest set by Betty, in which she asks them to find Music Collection discs to help the moods of residents. "Wavering Heart" is another non-combat quest involving Tifa, as she competes against Andrea Rhodea in the pull-up minigame.

"Malicious Goons" is a combat quest that starts in Wall Market as Madam M offers the quest after talking to her, but is completed in the Sector 5 Slums. Likewise, though "Tomboy Bandit" starts in the Sector 5 Slums, to continue with it, the group must return to the Corneo Colosseum to fight the beastmaster and a hellhound. Finally, for "Chocobo Search", after finding all the chocobos around Midgar, it is completed by speaking to Chocobo Sam.

Chadley also sells his usual stock, and there is a vending machine in the Don Corneo basement that uniquely also sells

Don of the Slums. 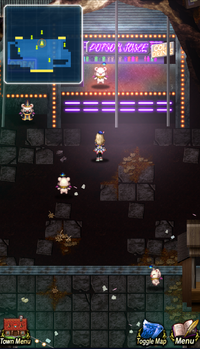 Wall Market from a distance.

Loveless posters at the ramen restaurant.

Trapdoor to the sewers from Corneo's palace.