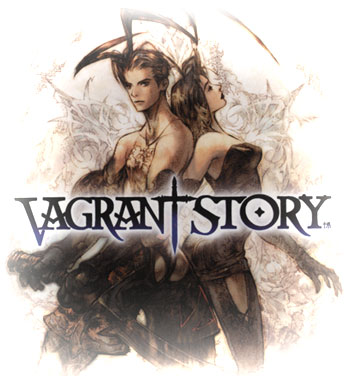 Welcome everybody, to the first Vagrant Story(US) Walkthrough on the Wiki that will actually be completed. I'm your host,R8.50Mango(pronounced 8 Rand 50 Mango).

First I'm going to assume that you already know how to start the game up, so I'm not going to pull a BlueHighwind on you.

Now the basic controls are as follows:

= The select button and what opens up the Battle Sphere.

= This opens the menu, where you can change weapons, use items usual stuff

= This is your jump button. Due to the massive amount of crevasses and chasms in VS expect to use this a lot.

Use the Directional buttons to move around, start can be used to skip cutscenes (and enter first person mode), select zooms in and out and the L1 and R1 buttons are to rotate the camera. That about covers the basic controls.

If you've played Final Fantasy Tactics you're going to recognise this battle system as this game was made by nearly the exact same people (yes!). Pressing Circle will open up a wire frame battle sphere. Anything inside this sphere is close enough to attack, cast spells, use items, etc. When an enemy is in range you can choose from a list of body parts to maul:

That's it for combat. Oh no, wait different weapons. Different weapons do different types of damage. Clubs and maces do Blunt Axes and swords do Edged damage and Spears and crossbows do piercing damage. There are some exceptions to the rule but it generally goes like this.

Damn I have a bad memory. I forgot about Break Arts. Don't use them. They damage you and do bugger all to enemies.

Part 1: Introduction and The Wine Cellar

Part 10: Weapons Combinations, Secrets, and The Holy Win (and why there's no point in trying.)