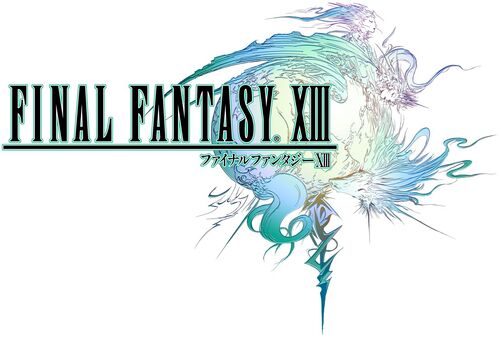 Hello again, Flames0fRebirth (AKA Flame) here with another Final Fantasy walkthrough. I had finished this game a couple of times and figured out just about everything, but I had a suspicion that there was probably some stuff that I was missing or didn’t know. I didn’t really plan on writing this, but the game’s been out for over a year now and nobody has done one yet, so I decided to do it for myself. This guide is the result of my obsessive need to make sure I left no stones unturned. As an added bonus, I was able to complete the entire game including every mission and superboss without level grinding, so if you hate grinding as much as I do you will be glad to know that it’s not only possible but not all that difficult. The only downside is that the game actually gives a trophy for level grinding, so if you want that one plus Ultimate Hero you’ll have to max out your characters after all the tough battles are already over.

Like I said in my FFXII walkthrough, I think it’s pointless for me to summarize the plot since you’re playing the game and watching the story unfold on your TV. Still, I will make no effort to conceal plot points if I think they’re relevant to gameplay or even if I just want to make a poor attempt at a joke about it. So you’ve been warned.

I believe these are the same on both PS3 and X-Box, but for the record I have the PS3 version so you may want to double check that if you’re using a 360. Most of these you’ll get along the way without even trying if you finish all the Missions, but I’ll make sure you know about the ones that require some effort. When it’s time to get the two hardest ones I’ll even tell you how to cheat a little bit to make life easier.

The rest of the info on this page can be skipped if you've played the game before, you should know almost all of it. Most of this stuff will also be mentioned during in-game tutorials for the first three chapters, so if you're getting impatient just scroll down to the table of contents to start the game. There are a few useful tips here though, so you really should check it out at some point.

The Command Synergy Battle System is a new take on the old Active Time Battle. You can queue up as many as six attacks while your time bar fills up, then unleash them all at once. It’s fast paced and somewhat free flowing, and it does keep things fresh and new, but there are also some drawbacks. For one, you only get to control your party leader, the other members run off a set of gambits that you can’t change. Also, if the leader gets KO’d it’s a game over even if your other party members are in perfect health and could easily revive you. Fortunately, they finally added the ability to retry a battle if you get a game over, meaning you can try new things and skip the level grinding without having to worry about losing the last hour of gameplay since you saved.

The battle system is based on Paradigms, which are very rigid classes that each character must choose from. The roles are very strict- Medics can only heal, Commandos can only attack, Ravagers can only use magic attacks, Synergists can only cast status enhancements, Saboteurs can only cast negative status effects, and Sentinels only serve to take hits and reduce damage received. Luckily, you can change roles at will within battles, giving you great flexibility. The AI gambits are usually decent, however there will be some times when your allies screw you over by doing something completely useless instead of what you want them to do. As your understanding of the gambits grows, you will learn how to avoid this for the most part, but they can still leave you shouting obscenities at your TV sometimes. By the way, if you hit Auto Battle your leader will use the gambits to select the next set of commands. This is usually fine, and it can save time rather than selecting all the abilities manually. But never hesitate to override the auto attacks when necessary.

A paradigm shift not only lets you adapt to changing conditions in the battle, there is also a trick you can use to speed up your attacks. After you’ve been in the same paradigm for a set amount of time (about the time it takes to fully fill your ATB gauge twice), when you change paradigms your entire party will have their gauges filled after the switch, letting you act immediately. This can be exploited by letting all of your attacks execute to empty your ATB gauge, then shifting paradigms to instantly act again. It’s very useful for quick healing, and if you have two offensive paradigms you can switch between them to get some extra shots in on your opponent.

One other note- the first time you do a paradigm shift in battle, the animation will take a few seconds, meaning you won’t be able to act until it’s finished. However, if your party leader is in the air or in the middle of a long animation such as a Full ATB skill this animation will be skipped and the change will be instantaneous. Your first shift with the party leader on the ground will still do the long animation, but in random battles you often don’t have to change more than once or twice, so you may be able to avoid it altogether. In longer battles, keep this in mind because you don’t want to get killed during the animation while you’re waiting to change to a healing setup. You'll want to make your first change just a little bit earlier to account for the extra time. 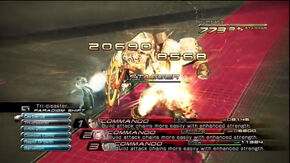 The key to winning battles in this game is Staggering the enemy. Every opponent has a Chain Gauge which starts at 100% and goes all the way up to 999.9%. This is the multiplier for all damage done to that enemy, meaning you will do ten times normal damage with a full gauge. Every enemy has a resistance to raising their chain, from 0 to 100. They also have a stagger point, when you get to that percentage they go into Stagger Mode. At this point their chain resistance goes to 0, meaning you can increase their gauge very quickly to increase damage output, and it also becomes very easy to interrupt their attacks when you hit them. Eventually, you will also gain the ability to launch a Staggered foe into the air, preventing it from attacking at all. The way to raise a chain gauge is by attacking with Ravagers, however the gauge will fall incredibly quickly after the hit, making it nearly impossible to fill it up. To keep the gauge from dropping, hit the enemy with a Commando or a Saboteur. This is the standard strategy for defeating just about every enemy in the game.

These are very important if you want to get a good battle rating, not to mention survive the tougher battles. The standard effects are back, such as Haste, Protect, and Shell, but this time around there are also Deprotect and Deshell to decrease physical and magical resistance. There is also Imperil, which makes the victim more vulnerable to elemental attacks, which can be exploited by adding elemental properties to attacks with spells like Enfire. Pain and Fog are new entries, they prevent the target from using Physical and Magical abilities, respectively. Finally, you have Curse and Vigilance. In most video games if you punch a guy in the face or shoot him in the chest it will somehow not stop him from attacking you, even for a split second. In this game it is actually possible to interrupt and cancel attacks, and putting Curse on the target makes this more likely. Vigilance is the opposite, it makes you resistant to interruptions. This can make some enemies a lot less annoying.

Tech Points are used for special abilities that are executed instantly. These include Renew, a powerful healing spell, and summoning Eidolons. Techs cost anywhere from 1-3 TP, and you can only have a maximum of 5 TP at any time. There is a little gauge at the bottom right of the screen that builds slowly after each battle. The lower it is, the faster it builds up. The higher your battle rating is, the more TP you gain back after the fight. 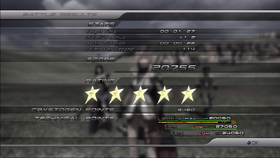 After every battle, you will see the Results screen. It’s a system of 0-5 stars, determined by your battle score. Follow the link if you really want the details, but the bottom line is it’s based solely on how long you take to finish. The target time is determined by the Attack/ Magic ratings of your party and the HP of the enemies, and your base score is 10,000. You gain or lose points depending on whether you came in above or below the target time. The higher your rating is, the more TP you get and the better your chances of getting items as a reward. Since you can just retry after a game over, don’t hesitate to take a risk and stay on the attack instead of healing if the battle is almost over. All out offense is the way to get five stars.

The Crysarium is a system of nodes that carry stat boosts and abilities, similar to the Sphere Grid from FFX. Unlike FFX, each character has a unique grid, meaning you can’t make everybody all-powerful carbon copies of each other. Each party member has three primary roles, and it is best to level these up before you worry about the secondary roles. The nodes in the secondary jobs cost a hell of a lot more and do a hell of a lot less. The Crystarium upgrades at several points throughout the story, meaning you won’t be able to ridiculously over-level for most of the game. You actually can’t get access to everything until after you beat the final boss. I’ll mention in the character intros what each party member is best at, but it’s basically the first three roles they have access to.

With the preliminary info out of the way, let’s start the actual guide. Since the game is so linear for so long, I’ve divided the contents into two sections- storyline and postgame. So if you can handle the main game and you’re just looking for info on how to complete all of those missions, start out on the Postgame side.