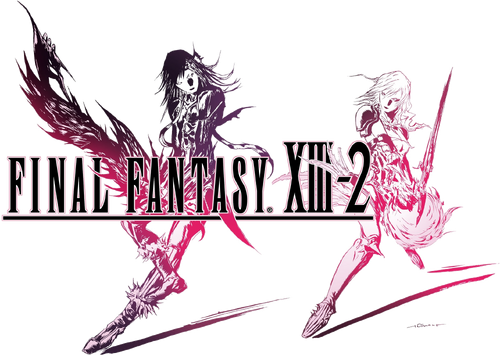 Ah man it feels good to be starting another one of these after years of me growing and changing and not being dumb and 13. Feels real good man. Anywho, welcome one and all to my magnificent return to the world of Final Fantasy. It is I, Cymbeline, and I'm here to guide you through the first of two sequels for Final Fantasy XIII. If you're not aware already I actually wrote a walkthrough for the first game years ago and it's not all that bad. Am I terribly proud of it? No. But it exists and now this is going to exist too.

But enough about me, you're here for Final Fantasy and Final Fantasy you shall receive. XIII-2 picks up where XIII left off, as most sequels do. But this game cleaned up the combat system and actually made it a ton more fun and way less tedious. There is a trade-off though, the story isn't the best. It's not the worst by any means but its not like jaw droppingly awesome. It's pretty okay for a sequel if you ask me. At the very least this is a fun game, and really what more could you ask for?

This games controls are pretty basic, it uses the same controls from Final Fantasy XIII and I'm literally going to just copy and paste them from my XIII walkthrough. If there's anything different I'll go into more details about it when the time comes up.

As a sequel the plot of this game is far less in depth than its predecessor. It's also quite a bit more "open world." I use quotes because that's a fairly loose term to describe it. But the basics are you travel around, kill monsters and complete quests. It's truly the standard RPG format. And of course my job is to lead you to completely all the quests this game has to offer. I'd be a terrible walkthrough writer if I didn't.

The combat is a vast improvement over the system used in the previous game. Most importantly if your leader dies you switch over to the other human character and you can keep fighting instead of immediately losing which is already an A+ for Square honestly. You do only have two human characters to use in the game though so if both are low on HP and one dies you're going to need to be proactive to make sure things don't end horribly. Paradigms still exists and operate the way they did in XIII but the changes are way faster too, pretty much instant which is a Godsend.

Now what do I mean by you only have two human characters? Well the game will delve into that a little later but I hope you like Pokemon, because there are parts of this game that truly feel like it. But in all the right ways. Basically, and like spoilers I guess for those of you who haven't ever played this game yet (even though its been out for what like 7 years? Maybe more) but to fill your third party slot you capture monster crystals and use them as allies. It's really dope, and there are a lot of fun combinations to try out. Lots of monsters you capture are duds but the one's who are worth it, you'll know.

The crystarium returns in this game, but it operates a little differently. Monsters have their own crystariums and you use items to help them grow stronger while our lovely human characters have their own that they each follow. The main difference is that instead of each role getting a different branch of the tree, all roles share the same tree and once you complete it using any combination of role improvements that you want, it'll reset and you get to do it all over again. There are also little crystals and big crystals on the tree and the big crystals offer extra bonuses depending on what role you select to improve on that space. It offers a nice way to specialize your characters (for example leveling the Commando role on a big crystal guarantees a +2 increase to strength on top of whatever other bonus' the character would have already received.) We'll delve more into this when the time comes.

I'm sure there's something I'm forgetting but like I said I'll end up covering it when the time comes in the walkthrough proper anyways. God I hate writing introductions. Let's boogie shall we?

Retrieved from "https://finalfantasy.fandom.com/wiki/Walkthrough:Final_Fantasy_XIII-2/Cymbeline?oldid=2888324"
Community content is available under CC-BY-SA unless otherwise noted.