Hello again folks, just me, Hamfruitcake again. You're probably getting a bit sick of me by now but this being my 3rd walkthrough. Putting my other two aside and thinking about it; I actually really like Final Fantasy X. A lot. I know I got angry at FFVII but this one doesn't anger me, it's just a generally nice and easy going game I find. A perfect way to spend the summer. Do join me instead of going out and getting a tan.

To clarify I will be walking you through the International Version of this game, meaning there is plenty of fun to be had with those Dark Aeons.

Final Fantasy X was the first game on the Playstation 2 and first to have 3D landscapes and voice acting. So there. As far as Final Fantasy goes it takes little effort to diverge from the usual formula. You have a team of rag-tag colourful heroes out to save the world with their powerful magic and fighting skills. Except in comparison to the previous games where it all happens gradually this lot are straight in there after about 3 hours of gameplay on their mission to actually Save the World. There is a romance between the two lead characters (like you wouldn't guess when they first set eyes on each other) which is good because they are youthful pretty and age appropriate. So there is a romantic story and a save the world one melding together. Unlike FFVIII though this story is actually more coherent and interesting. I like it. Currently that's all that matters so let's get this show on the road.

There isn't much to put here because you will be getting tutorials for a lot of the nitty-gritty elements of gameplay. I can go through with them for you, but for a first time player I'd recommend you read through them and try not to just yawn and skip through without paying attention. Luckily, having just set my controller down from playing FFVII, the buttons in this game do actually make sense.

brings up your menu and the lowly

button does nothing discernible until you can start recruiting blitzball agents.

The game really does make it easy for you when it comes to exploration. If you ever need a hand or are in any way lost then you can quite easily flick your eyes to the top right corner of the screen to see your handy-dandy mini-map showing you where you are and a flashing red arrow showing you where to go. If you do get lost you can be safe in the knowledge you are the only person in the universe to do so. When in doubt, run forwards, or North if you will, you will surely then find where you are supposed to be. They don't call it Spira-the-straight-line for nothing folks.

This is without a doubt my favourite battle system in the series. Forget waiting for bars to fill up, this time around you will always have something to do and someone to order around thanks to the magic of the CTB system, or Conditional Turn-Based Battle. This means that the box in the top right hand side of your screen will tell you when your characters are ready for their next turn by showing their faces. If you have good eye sight you'll notice their skin tones vary greatly from pale to deep tan to ... well blue. This allows you to keep track of when your party members will next make their move and ensures you make every action count. 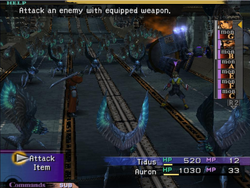 Magic such as haste and slow gives you more or less turns, but the main thing which effects how many times your character's face appears in the bar would be their Agility. The slower sluggish characters will come up much less frequently than the lighter more agile of your party. This can be irritating as the slower characters are usually your heavy hitters. This brings me to your team.

The characters in this game start off with their own distinct job classes. This will change much later on in the game when everyone starts merging with eachother becoming super-powered carbon copies... But for the most part the majority of the game is spent with your characters all performing different tasks. You will have a your standard white mage/summoner affair, your light-footed warrior, your thief, blue mage, samurai, black mage and then there is one who just doesn't seem to fit in anywhere. A guy who attacks using a ball...

In battle you will need most of these characters to assist you in dispatching different monsters with relative ease. Luckily the creators brought in a very clever idea of allowing you to switch your party members in and out by hitting the L1 button. Genius! Everyone who participates in the battle gains AP, they have to actually take an action to gain it, and this will give you levels. Instead of hording these levels away, as you would in any other game, you have to use them in our next section.

When you first take a look at the Sphere Grid it can appear truly daunting. When you zoom out your jaw may hit your toes or something to that effect. Thoughts such as I can't fill all of that in! will be flying through your brain. Well have no fear. You don't have to. Yet.

It's quite an easy system but just innovative enough to keep your interest, unlike say the Crystarium which gets old very quickly. You simply gain a level from amassing AP, by winning a battle; Overkill helps you gain more AP, and then you take your levels and spend them by making a move across the board. You should never have more than 3 or 4 levels on your characters as waiting to move them is just plain pointless. Moving one space takes up one level. Simple! You fill in your stats and abilities with spheres you pick up after winning battles. Have no fear these spheres are in abundance around the world and easy to come across upon winning battles.

There are five types of spheres which activate the different types of nodes you will come across on the Sphere Grid. The first four you will be seeing a lot of:

There are various other spheres out there for you to find, some sphere transform empty nodes into their namesake attributes. Others allow you to learn abilities without leaving your spot. And finally some allow you to jump about the board with minor restrictions.

Every character has their own special area on the Sphere Grid, (yes we're all sharing, don't be so stingy) and their own distinctive colour to keep track of them. They actually leave tracks to show where they have been and what nodes they have activated. If you are looking at the grid you will note in places another character has activated the nodes there will be a slight speck of their distinct colour on the outer ring of the node. The colours of your team's sphere grids are as follow:

To confirm what I'm guessing you can already tell. Kimahri is an open book. You can take him wherever you please on the Sphere Grid. Two different options would be either to take him down Auron's route and boosts his attack and defence or you can take him down Rikku's route and learn Steal early on in order to boost your itinerary. There's nothing worth stealing until Rikku does make an appearance but it might be worth your while.